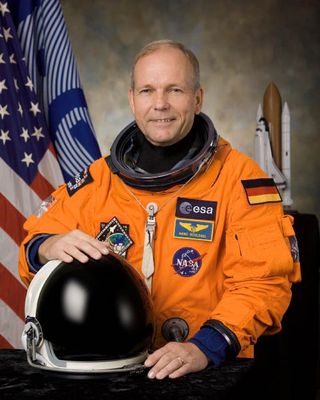 PERSONALDATA: BornAugust 3, 1951 in ?berlingen, Germany, but considers Aachen to be his hometown.He has seven children. Married to Heike Schlegel-Walpot. Recreational interestsinclude skiing, scuba diving and flying. He also enjoys reading, and being ahandyman.

1972-79:Studied at the University of Aachen, Germany, graduated with a Diploma inPhysics.

PUBLICATIONS: Publications and scientific reportsin the field of semiconductor physics.

1970-72: Served as a paratrooper with theFederal Armed Forces. Left with the rank of second lieutenant.

1986-88: Specialist in non-destructivetesting methodology in the research and development department of the company"Institut Dr. F?rster Gmbh & Co. KG" in Reutlingen, Germany.

1990-93: Payload Training in Cologne,Germany and at the Johnson Space Center in Houston, Texas.

1998: Integrated into ESA?s singleEuropean astronaut corps, which is involved in the assembly and on-boardoperations of the International Space Station.

1999-02: Worked in the ISS Branch on mechanisms & structures,on crew equipment and on the ISS systems.

Currently: Assignedby ESA in May 2005 as ESA Lead Astronaut at JSC. Since September 2005 hasworked as Shuttle CAPCOM, as ISS Instructor CAPCOM, and in the ISS Branch aslead for systems and crew interfaces, heading up a team of 12.

Schlegel is assigned to the STS-122mission that will deliver the European Space Agency?s Columbus Laboratory to the InternationalSpace Station.