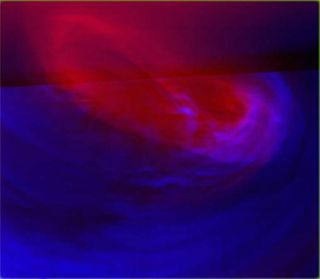 Venusis the world closest to Earth in terms of size, mass, distance and chemicalmakeup, but while Earth is a haven for life, Venus is typically described as hellish,with a crushing atmosphere holding choking clouds of sulfuric acid over a rockydesert surface hot enough to melt lead.

TheVenus Express mission that the European Space Agency launchedin 2005 is now shedding light not just how Venus became the daunting worldit is, but also how it still remains somewhat Earth-like.

Thespacecraft intriguingly found evidence of lightning on the planet, even thoughnone should exist. The clouds of Venus are like smog clouds on Earth, which donot generate lightning here.

Theprobe did not actually see visible flashes in Venus' sky, but it did spot"whistlers"—low-frequency radio waves that last for a split-secondand are thought to come from electrical discharges.

"Weconsider this the first definitive evidence of abundant lightning onVenus," said researcher David Grinspoon. "So how much lightning isthere? If the high latitudes are typical, we can extrapolate to the planet as awhole there are about 50 lightning flashes per second, about half the rate onEarth, but it's possibly higher."

VenusExpress also focused on vastrotating vortexes of clouds at Venus' poles. These vortexes are reminiscentof vortexes that appear over the poles on Earth in the winter of eachhemisphere. Although the vortexes on Venus are larger and more energetic thanEarth's, in many respects they are quite similar, researchers said.

Thespace mission also shed light on how Earth-like Venus was. For instance, Venus mayhave had Earth-like oceans in its distant past, but its searing hot surfacecannot sustain water now. Although vast volumes of water vapor are not now seenin Venus' atmosphere, new findings suggest how a great deal of water may havebeen lost.

Venusdoes not have a strong magnetic field as Earth does, meaning that sunlightcould then have broken up the water into hydrogen and oxygen that then easilyescaped the planet's atmosphere. Scientists had seen hydrogen leaving fromVenus, but now they also have seen oxygen depart.

"Learningabout the escape rates of hydrogen and oxygen will help us reconstruct how muchwater Venus had in the past," Grinspoon said. "Venus may have lost atleast up to an Earth's ocean's worth of water."

Thescientists discussed their findings in a teleconference with reporters todayand detail the work in the Nov. 29 issue of the journal Nature.