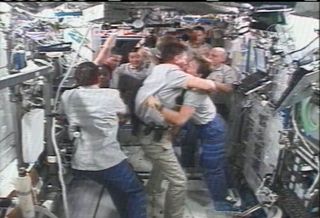 It's crunchtime for three astronauts aboard the International Space Station (ISS) as they primetheir orbital laboratory for the planned December arrival of a newEuropean-built module.

Commandedby veteran NASAspaceflyer Peggy Whitson, the station's Expedition 16 crew is trading its Thanksgivingholiday this month for a busy to-do list that includes no less than threespacewalks - the first of which begins Friday - and two critical moves of ISShardware.

Thespacewalks and hardware relocations must go smoothly, and NASA must find a wayto trim about five days' worth of work from the Expedition 16 crew's schedule,if the shuttle Atlantis is to launch toward the ISS on Dec. 6 with the EuropeanSpace Agency's (ESA) Columbuslaboratory.

"Basically,we're taking our plan a couple weeks at a time now," Holly Ridings, NASA'slead ISS flight director for Expedition 16, told reporters Tuesday. "Our focusis to keep the [shuttle] launch in December and it'd be great if we can makethe beginning of that window."

NASA has aslim window that runs from Dec. 6 to Dec. 13 in which to launchAtlantis to the ISS while the station's solar arrays and the Sun are in theoptimum position to provide power during docked operations. If the shuttlemisses the December window, it would launch no earlier than Jan. 2, mission managershave said.

Commandedby veteran shuttle flyer Stephen Frick, Atlantis' STS-122 astronaut crew will attachESA's Columbus laboratory to the starboard side of Harmony, which serves as thecentral hub for European and Japanese modules at the ISS.

But beforeFrick and his six STS-122 crewmates can launch spaceward, Whitson and her own crewmust move Harmony to its permanent spot outside the ISS.

Astronautsdelivered the Italian-built Harmony node to the space station last week during NASA'sSTS-120 shuttle mission aboard Discovery, but the bus-sized compartment wasattached to a temporary berth on the outpost's Unity module. Discovery'sSTS-120 crew, meanwhile, is set toland on Wednesday.

On Friday,Whitson and Malenchenko will step outside the ISS to prime a shuttle dockingport for its move from the tip of the station's U.S. Destiny laboratory to theend of Harmony.

Tani will usethe station's robotic arm to move the docking port move early Monday, then relocatethe entire Harmony-docking port structure back to the front of Destiny onWednesday. A pair of spacewalks, on Nov. 20 and 24, respectively, will foldHarmony and its docking port back into the ISS power and data grid.

Only then,Ridings said, will the Expedition 16 crew be ready to open Harmony and itsshuttle docking port - known as Pressurized Mating Adapter-2 - for business asearly as Nov. 26. Once Harmony is reopened, the station crew has about 15 daysof work to perform, but only 10 days until the earliest opportunity forAtlantis to launch.

"The folks on the ground are very good about scheduling things out and making sure that we're not too overloaded," said NASA astronaut Clayton Anderon, a former Expedition 16 crewmember returning to Earth aboard Discovery. "I don't think it's going to be any trouble for them. They're going to knock it out and do great things."

Missionmanagers are now looking at which tasks can be culled from the Expedition 16crew's schedule to allow the earliest launch attempt possible while stillallowing the station astronauts adequate time for rest and relaxation.

Even beforelaunching to the ISS, Whitson and her crew decided to forego taking thetraditional U.S. Thanksgiving holiday off on Nov. 22 if it would help easetheir packed station construction schedule, Ridings added.

"Evenpreflight, the crew knew that this month of November was going to be verybusy," Ridings said, adding that flight controllers will also be hard atwork. "We'll have turkey in the control center and have a lot of fun, sowe're looking forward to it."