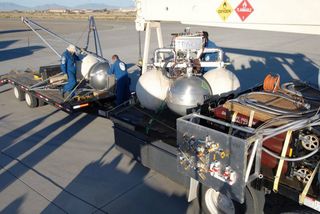 HOLLOMANAIR FORCE BASE, New Mexico ? Heartbreakingly close. That?s all you can say regarding the failure today forthe Armadillo Aerospace team in their bid to win prize money in the NorthropGrumman Lunar Lander Challenge.

Themulti-legged ?MOD? vehicle successfully made the first hop from pad to padearlier in the day. But on the Level One return trip, the craft tipped over ontouchdown.

The vehicle kicked upsignificant dust as it hovered above its landing site ? perhaps causing controldifficulties just seconds away from success.

John Carmack, team leader of Armadillo Aerospace, later announced the cause of the vehicle's mishap.

Apparently, during the landing phase, a piece of the rocket?s engine fell off. The vehicle began to veer due to the problem, with the motor shutting down, causing the craft?s touchdown mishap.

?Tomorrow is another day,? Bretton Alexander, Executive Director of Space Prizes and the X Prize Cup, told SPACE.comafter the incident.

The X PrizeCup competition features rocketeers vying for $2 million in prizes that are on the line - cash made availablethrough NASA's Centennial Challenges Program. That space agency funding isfocused on speeding up commercial development of technology that can ferrycargo and humans between the moon's surface and lunar orbit.

ArmadilloAerospace is led by computer gaming guru, John Carmack. He and his teammateshave brought two different vehicles, ?Pixel? that is meant to fly in Level Two,and the MOD craft in Level One. This is the team's second attempt at the challenge in New Mexico, they were the only entrant in last year's event, which they lost.

At presstime, it is not clear what strategy will be taken by Armadillo Aerospace to flytomorrow?s Lunar Lander Challenge ? will they try Level One again, or go forthe gusto and try the larger Level Two prize? Could both Level One and LevelTwo be flown in the same day?

Thecompetition is divided into two levels. Here are the basics: