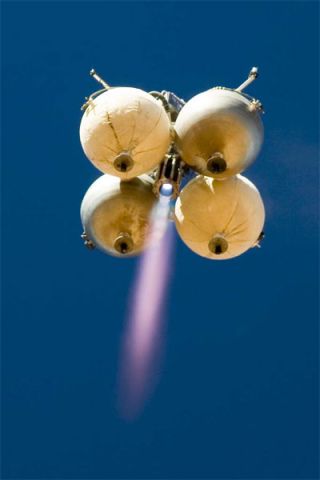 HOLLOMANAIR FORCE BASE, New Mexico ? Weather androcketry are in synch for the Armadillo Aerospace team to launch quickturnaround vertical takeoff and landing vehicles in the quest to win NorthropGrumman Lunar Lander Challenge money.

Here atopening day of the X Prize Cup, the Armadillo?s lead rocketeer, John Carmack,is taking a fingers-crossed stance, in anticipation that all his team?s work isgoing to pay off.

The challenge was designed by NASA to speed up the commercial development of a vehicle capable of ferrying cargo or humans back and forth between the surface of the Moon and low lunar orbit.

Once again, Carmack and his team are the lone competitors in the challenge. Last year, despite three attempts, Armadillo Aerospace's Pixel failed to win the prize at the X Prize Cup.

?I doclassify myself much more as an engineer than an entrepreneur,? Carmack told anaudience October 26 at an X Prize Foundation Executive Summit. He also chidedsome of his next-of-kin rocket builders that all that?s needed is a goodbusiness plan.

?There areplenty of technology problems that must be faced, he explained.
?Technical problems only submit when they?ve been beaten to submission. And alot of them are biting back,? he noted.

Carmacksaid he?s spent about $3.5 million dollars out of his own pocket so far. ?I?m alow-grade millionaire?I have enough money to continue putting this half-milliondollars a year into our project as necessary.?

After someseven years of development, ?we?ve made great progress,? Carmack added. ?I justdon?t see what?s going to stop us.?

As a keypet peeve, Carmack said that some are taking the scapegoat approach, blaming ?thebig bad government? for impeding progress. He felt that this is not accurate,with Armadillo spending about 25 percent of their efforts dealing with regulations,permits, insurance, etc., with little impact on their eight-person team.

Test alittle and fly a lot is alive and well at Armadillo Aerospace, Carmackexplained.

?Nobody hasa good reusable spaceship now?and I would contend that right now nobody reallyknows exactly how to do that,? Carmack told the audience.

??I know Armadillois sort of a hard company for some people to get their heads around. Where onone hand it looks like sort of a garage/hobby operation. But on the other hand,we?re the ones that are out there doing this,? Carmack said. ?We don?t havemore flight tests than anyone?we have more flight tests than everyone.And it?s going to continue that way,? he said.

TheArmadillo approach is modularity of flight hardware. Projecting out on hisengineering trajectory, Carmack said he and his team are looking at building acommercially viable reusable vehicle, one that rockets people and cargo up to62 miles (100 kilometers) at the edge of space, then returns to Earth for asoft landing.

Atop therocket structure, a six-foot acrylic sphere serves as a cabin, sort of afishbowl flying up into space, Carmack related. ?That?s more compelling thanbeing strapped into a little seat and looking out a small porthole.?

Carmacksaid he expects to have that craft in operational status within a five yearperiod, with the starting gun, if all goes well, from next year. It?s a new wayof doing research,? he said.

But as apublic-carrying vehicle, Carmack envisions $10,000 to $20,000 tickets to ridethe craft, labeling it the world?s biggest roller coaster. ?In the end, it?sgoing to become an attraction.?

Anothercautionary warning Carmack tossed out to fellow commercial space communitymembers is overuse of simulations, rather than building and testing thingsincrementally.

?Theunknown unknowns are always going to catch you,? Carmack said, no need to studythings to death via expensive simulations. Rather, do testing in reality, ?andwe?re heavily biased towards that,? he said.

Work isprogressing and the obstacles are falling, Carmack said, with ArmadilloAerospace of Mesquite, Texas sensing it has a credible plan all the way toorbit.

?In theend, while space is not easy, it is hard ? but it?s not complicated,? Carmackconcluded.