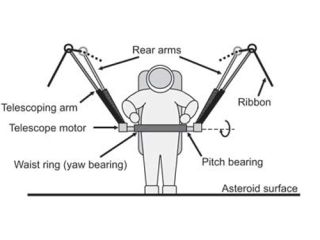 Diagram of the system for tethering an astronaut to an asteroid using circumferential ropes.
(Image: © MIT/Ian Garrick-Bethell)

MITresearchers have devised a tether to help astronauts walk across asteroids onfuture missions. The tether system would wrap all the way around theasteroid. This really adds a new dimension to the term "asteroidbelt."

The MIT researchers,Christopher Carr and Ian Garrick-Bethell, anticipate that astronauts will find itdifficult to work on the surface of an asteroid, due to the extremely lowgravity. An asteroid one kilometer in diameter would have a surface gravityjust 1/28000th that of the Earth; an astronaut could literally jump right offthe asteroid and not come back down.

Once tethered, however,astronauts could walk across the surface in a more normal manner, and performphysical chores like digging a small hole or pulling objects from the surfacemore easily (see diagram).

The idea of wrapping atether all the way around an asteroid may seem like an extreme solution. However,the loose composition of asteroids could make other strategies, like drillingor attaching a permanent "bolt" or other hardware to the surface,impossible to implement.

There has been an increasein interest in asteroid science and exploration in the last few years; the Dawnmission is trying to fly to Vesta and Ceres, the largest rocks in the solarsystem. NASA is also studying a mannedmission to a Near Earth Object and even the possibility of usingan asteroid as a radiation shield. Serious scientists have even proposed movingasteroids that will come too close to Earth. A circumferential tether couldcome in handy in the near future.

Carr and Garrick-Bethell arepublishing their work in an upcoming issue of the journal Acta Astronautica.

Via MIT;find out more about asteroids.