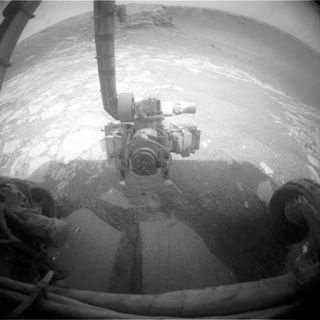 NASA's Marsrover Opportunity has arrived at its first stop inside an expansive crater,where it is poised to reach out and touch what may be the ancient remains ofthe red planet's surface, mission managers said Wednesday.

Opportunityis perched on the wall of Victoria Crater, a half-mile (about 800-meter) widescar in the surface of Mars that has long been a goal for the six-wheeled NASArobot. The rover began itsdescent into the crater in earnest earlier this month, and now sits beforea bright band of material that runs along Victoria's walls much like the ringaround a bathtub, mission managers said.

"Wesuspect that this bright band of material is the ancient surface of Mars priorto the impact that created Victoria," Mars rover project manager JohnCallas, of NASA's Jet Propulsion Laboratory in Pasadena, Calif., told SPACE.com Wednesday. "It'scomposed of three distinct layers that we can see in the imagery."

"Thiswill be the first of several stops within this band of rock," said roverscience principal investigator Steven Squyres, of Cornell University in Ithaca,N.Y., in a statement. "By sampling it at several different levels in thecrater, we're hoping to figure out the processes that led to its formation andits very distinctive appearance."

But beforeOpportunity can begin prodding the bright patch of martian rock, missionmanagers must first make sure it's safe to do so.

In order toreach the science target, which sits about 40 feet (12 meters) below therim of Victoria Crater, Opportunity had to park itself at a 25-degree tilt.NASA's rover handlers also took care to ensure that Opportunity could back outof the crater if the path forward appeared too hazardous.

Callas saidOpportunity's operators are experienced in controlling the robot while it isperched at a tilt. The rover initially set down on Mars inside the small Eagle Crateron its Meridiani Planum landing site, then went on to explore the interior of thestadium-sizedEndurance Crater later in its extended mission.

But the25-degree tilt is the most severe roll Opportunity has seen to date, missionmanagers said. Over the next day or so, the rover will move its arm in acarefully choreographed pattern to ensure it won't slip while studying itsbright rock band target.

"Ifthe rover doesn't move, or it doesn't move substantially, then we believe that wecould proceed with our science objectives," Callas said.

About theonly issue plaguing Opportunity at present is a glitch with an instrument usedto remotely analyze the minerals present in the martian surface. Engineersinitially believed a mirror for the Miniature Thermal Emission Spectrometer(Mini-TES) may have jammed, but later scans found it to be working properly.Contamination from a seriesof intense dust storms that engulfed Mars in recent months may be anotherculprit, Callas said.

"Allthe telemetry indicates a healthy Mini-TES," Callas said. "So it's areal conundrum as to what's causing this problem."

WhileOpportunity toils inside Victoria Crater, the rover's robotic twin Spirit ishard at work on the other side of Mars on a rock slab dubbed Home Plate. Therover recently drove to a new site on the plateau-like Home Plate that containsevidence of the interactions between volcanism and water in Mars' distant past,NASA officials said.

Spirit andOpportunity first landed on Mars in January 2004 for an initial 90-day missionthat has swelled into years. The robots' perseverance has allowed researchers to cullnew secrets about present-day Mars and the planet's ancient, watery past, missionmanagers said.

"Obviously,I have the greatest job in the solar system," Callas said. "It'sexciting, it's rewarding and we're doing great exploration."