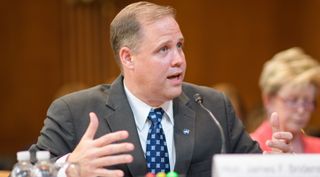 NASA Administrator Jim Bridenstine said the defeat of Rep. John Culberson, who chaired the appropriations subcommittee that funded NASA, was a concern to him as the agency seeks to keep its exploration programs funded.
(Image: © Joel Kowsky/NASA)

WASHINGTON — NASA Administrator Jim Bridenstine said Nov. 15 that the reelection defeat of a key appropriator, and the potential for budget cuts next year, is a cause for concern for him as he tries to balance the agency's priorities.

Rep. John Culberson (R-Texas), chairman of the commerce, justice and science (CJS) subcommittee of the House Appropriations Committee, was defeated Nov. 6  in his bid for a tenth term in Congress. His defeat, as well as a Democratic takeover of the House, will put the leadership of that subcommittee in new hands next year.

Culberson was known for his efforts to increase funding for NASA, particularly for missions under development to go to Europa, the potentially habitable moon of Jupiter. Bridenstine, speaking at a meeting of the National Space Council's Users' Advisory Group here, said Culberson's absence will be felt. [Presidential Visions for Space Exploration: From Ike to Trump]

"NASA has benefitted greatly from one congressman in particular, John Culberson," he said. "He will not be back in the next term, and that is of concern to me personally."

Bridenstine also noted that NASA, like other federal agencies, has been asked by the White House to develop proposals for a five percent cut in its fiscal year 2020 budget, currently being crafted for released in February. That would require NASA to find approximately $1 billion in cost savings across its programs.

Bridenstine was responding to a question from committee member Harrison Schmitt, the Apollo 17 astronaut, who was concerned about the level of funding reserves available for NASA's major exploration programs. "We're okay for now," Bridenstine said. "I'm sounding a warning." He said later the specific issue of reserves had not come in discussions with the Office of Management and Budget.

Despite that potential funding problem, Bridenstine said he was optimistic about the prospects for NASA's exploration strategy, including cooperation with international partners. He noted he had just returned from Canada, where he found "a lot of excitement" about lunar exploration. "I find that everywhere I go on the planet," he said. "There's a lot of international support for going to the moon."

That cooperation, he said, is essential to keeping the exploration program sustainable. "There is a tradeoff between going back to the moon as fast as possible and getting humans to the surface tomorrow," he said, "and building a sustainable architecture where we can go back and forth really in perpetuity, and that's the objective."