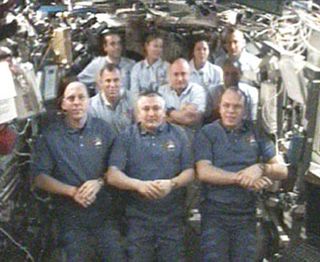 The Expedition 15 and STS-118 crews participate in a joint crew news conference aboard the International Space Station on Aug. 17, 2007.
(Image: © NASA.)

HOUSTON --Astronauts aboard NASA's shuttle Endeavour are confident in the decision not topatch a small gouge in their orbiter's heat shield before leaving theInternational Space Station (ISS), the spaceflyers said Friday.

"Weagree absolutely 100 percent with the decision to not repair the damage,"shuttle commander Scott Kelly told reporters Friday via space-to-ground videolink. "We were certainly concerned that if we did the repair, we couldpotentially cause more damage to the underside of the orbiter."

Abaseball-sized piece of tank foam weighing 0.021 pounds (about one-third of anounce) bit into twoof Endeavour's fragile tiles just aft of the orbiter's right landing geardoor during its Aug. 8 launch. After nearly a week of intense scrutiny andtests, mission managers concluded that the ding in the 1.12-inch (2.8-centimeter)thick tile posed no risk to Endeavour or its astronaut crew.

"Idon't think it's really an issue, and I think it was a great decision,"Endeavour pilot Charlie Hobaugh said of the tile damage.

Shuttlemission managers said Friday that they are watching the developing HurricaneDean in the Caribbean Sea and preparing for the chance the storm swing intowards Houston after its anticipated arrival in the Gulf of Mexico last week.Among those options are landing Endeavoura day earlier than its Aug. 22 target, or keeping the spacecraft in orbit abit longer.

"Itwould certainly be a long day," Kelly said of undocking Endeavour from theISS early, adding that his crew would be ready if required to do so.

Now wellinto their ninth day in space, Endeavour's STS-118 astronauts were busymoving cargo between their shuttle and the ISS as they worked alongside thestation's Expedition 15 crew.

Leading thecargo transfer is teacher-turned-astronautBarbara Morgan, an Endeavour crewmember who first joined NASA in 1985 asthe backup to Teacher in Space Christa McAuliffe prior to the Challengertragedy. True to her teacher role, she has performed several educational eventswith students on Earth, the last of which slated for Sunday.

"Ithink the best lesson is that this is truly a marvelous place," Morgansaid. "The station is incredible."

STS-118 spacewalkerDave Williams, a veteran Canadian Space Agency astronaut, added that humanity'simpact on Earth is readily apparent from his perch in Earth orbit, with waterpollution and fires easily visible to the naked eye.

"Allof this reminds you that the planet is in fact a very small place and all of ushere on Earth need to develop a sense of planetary stewardship," Williamssaid.