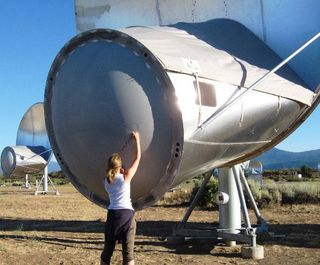 Ruth Pearson signing the dent she created on one of the Allen Telescope Array antennas.
(Image: © Lisa Grossman)

Every kidloves to play make believe. Some play cops and robbers. Others play house. Andsome dress up in their parents' clothes, pretending they have their parents'jobs and dreaming about what they'll be when they grow up.

When I wasa kid, I dreamed about being an alien hunter. As a third grader peering into amicroscope at single celled organisms, I imagined a universe full of tiny,hardy life. Why not? Microbes can live comfortably in the most absurdlyunfriendly reaches of the planet. If these little creatures can survive involcanoes, at the bottom of the ocean, embedded in glacial ice, and even incountless human guts, then they must be able to exist on other planets! Lifemust be absolutely everywhere!

I didn'tknow then that there was an entire community of scientists who felt exactly thesame way. I certainly didn't expect that before I'd even graduated fromcollege, I'd be working with them.

Thissummer, for the second year in a row, the SETIInstitute in Mountain View, CA hosted a group of undergraduates from allover the world to work one-on-one with research mentors, funded in part by theNational Science Foundation and NASA's Astrobiology Institute. We were a motleybunch of 16 students, from big universities and small liberal arts colleges,coming from as nearby as California and as far away as England and Hawaii, and studying physics, astronomy, geology, chemistry, and biology. But thissummer, we were all alien hunters.

For many ofus, the experience was nothing short of fantasy fulfillment.

No twostudents did the same thing. One student spent her summer searching forextrasolar planets and doing radio astronomy using the Allen Telescope Array (ATA),located at UC Berkeley's Hat Creek Radio Observatory in northern California. She's already left her mark on the SETI community, in a literal sense: whileoperating the telescopes at the ATA, she inadvertently crashed one antenna intoanother. She says the other scientists were more intrigued than annoyed. Thetelescopes are supposed to be programmed to avoid each other, so her mentor wasimpressed that she'd managed to cause a collision. She even got to sign hername near the dent it made. Fortunately, the actual damage was minimal, and won'taffect future operations or observing.

Anotherstudent spent her days studying the geology of Europa, one of Jupiter's moons. Scientistsbelieve that it has a vast liquid water ocean beneath a layer of ice at thesurface. She analyzed images of Europa from the Galileo mission, looking forareas of the surface whose appearance changed over time and trying to determineif those changes are what you would expect if there were a liquid ocean. Shethinks the possibilities for life on Europa are especially exciting. "Assoon as I heard about Europa, I thought, 'Oh, awesome. Let's look for lobsters!'"she said. So far, she hasn't discovered any Europan crustaceans, but she'senjoyed learning more about geology and approaching biology and chemistry froman astronomy perspective.

Or imagineinstead working with an instrument that will be on Mars within a year. Onestudent spent the summer testing the limitations of a soil composition analysisinstrument ? a replica of the one that was launched toward Mars on the Phoenixlander on August 4. "It's like sending a little piece of me to Mars,"she said. The experience gave her ideas for future research prospects, too. Phoenix is expected to land on May 25, 2008, a week after she graduates from college. She'salready thinking ahead: "My mentor was saying he'd like to have somepeople in the lab to, say, throw a certain clay into the instrument and seewhat kind of data we get so we can compare it to the data we get back from Phoenix.I'd really like to come back and work here again," she said. "Thissummer is the first time that I've found a location, a career type and a set ofpeople that I could see myself getting along with for the long term."

Severalstudents hit the summer research jackpot. Imagine a summer job that involveswatching a meteorshower from an airplane, high above the atmosphere, wearing a NASA jumpsuitwith a mission patch that you helped design. Or a project that takes you to Hawaii for an observing run at the Keck Telescope at the summit of Mauna Kea to watch thechaotic orbits of Uranus' moons and the rare ring-plane crossing. Or anopportunity to attend the week-long Seventh International Conference on Mars,and hear the world's leading Mars experts discuss their research and plans forthe future of Mars exploration. These are just a sampling of the many realprojects that students at the SETI Institute were involved in.

All of usgot to take a week-long field trip to the Hat Creek Radio Observatory, home of the Allen Telescope Array, where Jill Tarter,SETI's director of research and the inspiration for Carl Sagan's novel Contact,explained how the telescopes work and what research they'll be used for. Severalof us even camped overnight in tents under the array. It wasn't veryscientifically useful, but it was definitely something to write home about. Laterthat week, we spent two days hiking in Lassen Volcanic National Park with aPark Service Ranger and the SETI Institute's RoccoMancinelli, a microbiologist. We visited "Bumpass Hell" and "Devil'sKitchen," two hydrothermal sites of remnant volcanic activity where thewater is acidic and boiling hot, yet teeming with microbial life.

In a weekor two we'll all take off our astrobiologist costumes and return to our normalcollege lives. Nevertheless, whether we continue on in astrobiology or not, thissummer of playing alien hunters will stay with us.

If youthink this sounds like a great way for students to spend a summer, you'reright. And if you know any scientifically-inclined undergraduates who mightwant to experience it for themselves, spread the word. Next summer the SETIInstitute will host a new cohort of students who can try their hands at alienhunting. Watch the Institute's REUwebsite in the coming months for more information on the results of thissummer's program, as well as applications for next summer's opportunity. Itcould be the start of the research career you always dreamed about.