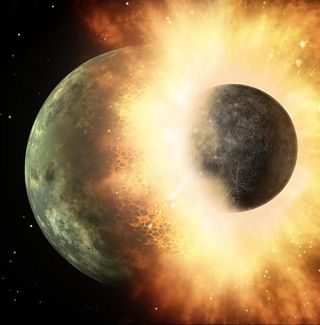 Whether Mercury formed from a single collision, as shown in this artistic image, or from a rain of impacts, it is probably fairly unique among the planets of the galaxy.
(Image: © NASA/JPL-Caltech)

With its massive iron core and ultrathin crust, Mercury is something of an oddball in the solar system. Early in its life, at least one collision stripped the planet of its outer layers, allowing the bulky core to dominate. New research suggests that whether the planet suffered a single, head-on hit, a glancing blow or a rain of impacts, the evolutionary path it has taken is relatively rare among planets.

When NASA's MESSENGER spacecraft arrived at Mercury in 2011, it measured relatively high levels of sodium and thorium. "Because these elements are rather volatile, they are expected to be lost in high-temperature events such as giant impacts," Alice Chau, a graduate student at the University of Zurich, told Space.com by email.

Puzzled by the surprising measurements, Chau and her colleagues modeled three different scenarios to see if they could determine which one was the most likely explanation for Mercury's formation that would account for those elements' persistence. They found all three rarely appeared in the simulations.

"Forming Mercury by giant impacts is feasible but difficult," Chau and her colleagues wrote in their paper.

That matches observations that have been made with instruments like NASA's Kepler space telescope. So far, only a handful of rocky worlds denser than Mercury have been identified out of the more than 5,541 confirmed and candidate exoplanets.

Although Mercury is the smallest full-grown planet in the solar system, it is the second densest, topped only by Earth. Much of the planet is made up of the giant core, which is estimated to take up between 70 and 85 percent of the planet's radius. In 1988, researchers proposed that the planet's unusually large core was the result of a giant impact, which stripped away the existing mantle.

But MESSENGER threw the collision theory into disarray when it discovered lighter elements. Scientists began to question whether the high energies and temperatures that occur in an impact would have left behind the volatile material MESSENGER observed. In recent years, however, they have begun to question these assumptions, positing that the light elements that are present could have been able to survive an impact.

"It is possible that the impact led to the vaporization of these elements, but they condensed back onto Mercury's surface," Chau said, noting that such a scenario still needed to be investigated. Another possibility is that the volatiles come from deep inside the planet and were released as gas later in its evolution, after the impacts had occurred.

With this in mind, Chau and her colleagues modeled three different impact scenarios: a single direct hit, a glancing blow and multiple impacts from smaller objects. They found each case was challenging, in its own way.

The early stages of planet formation produced far more than eight cores that eventually became the solar system's planets. These objects and their smaller siblings careened around the solar system and crashed into one another. Scientists theorize that one such object slammed into young Earth to produce our planet's moon.

"Collisions were frequent during the early stages of the solar system's formation," Chau said.

The first scenario modeled a single giant object crashing head-on into Mercury. But, to create a Mercury-like object, the impactor had to move just right. It couldn't be too large or move too fast, or it would destroy the planet completely. Moving too slowly, however, would have allowed mass from the shattered impactor and the material blown off the world to fall back onto the planet, restoring the outer shell.

Next, the team looked at a hit-and-run scenario, in which an impactor with more mass than the initial scenario sideswiped the young planet with a glancing blow. This scenario more often formed a Mercury-like object in their simulations — as long as it didn't destroy the planet completely.

One of the biggest problems with either of these scenarios is what happens to the incoming impactor. If it isn't completely destroyed by the collision, the object remains in orbit around the sun on its new path. But you don't have to be an astronomer to know that no such object exists today. The only way to destroy the evidence is to have the original, fast-moving collider traveling on a very eccentric, stretched-out-circle of a path that would have sent its remnants hurling into the sun after it crashed into Mercury — conditions that Chau said are not very common.

On the other hand, Mercury only needs to get lucky — or unlucky — once.

"Only one collision like that is needed," Chau said.

The third option is that Mercury was bombarded by multiple objects at the beginning of its lifetime. The smaller objects would have less energy than a single slam, with each one stripping away only part of the missing volatile elements.

"It is therefore possible, and maybe even more probable, that Mercury formed as a result of multiple impacts," the authors write in their paper, which has been accepted for publication by the Astrophysical Journal and can be found at the preprint server arXiv.

Chau and her colleagues modeled two possible versions of this scenario, one with low-mass objects moving at the most likely impact angle and the other with slightly larger objects colliding at a range of angles. In both cases, the objects traveled at three to four times the speed an object on Mercury's surface needs to travel to escape the planet's gravity.

In the first scenario, as many as 20 different objects had to crash into Mercury to strip away enough material. In the most optimistic cases, it took six different collisions. The second scenario, with slightly larger objects, required only two to four collisions. The exact number depended on the impactor's mass, velocity and the angle at which it collided.

"It is more likely that Mercury formed via two collisions," with an angle of 28 degrees and speeds of 45,000 mph (20 kilometers per second), "than via ten collisions at the most probable angle," the researchers concluded.

But there are other factors that come into play. For one thing, the impacts have to be precisely timed.

"Collisions must have occurred early enough so that there is still a reservoir of bodies that can eventually collide with Mercury, especially for the multiple collisions," Chau said.

"It is preferable if Mercury is young and hot so more mass can be lost and some volatiles can still be outgassed," she said.

The timing between collisions also played an important role. After material is blown off, it takes approximately a thousand years for the cloud of debris to cool and settle back onto the planet. Since each individual collision affects the next one, a hot cloud of material surrounding battered Mercury after the first collision affects how much material can be stripped away. If Mercury has time to cool off between impacts, it holds on to more of its material.

"The tighter the collisions are in time, the easier it is to lose the mantle," Chau said.

So, which of the three scenarios is most likely to have formed the Mercury that exists today? The researchers aren't certain.

"Each of these scenarios requires specific conditions, and each of them has advantages and disadvantages," Chau said. She pointed out that a single massive impactor requires unusual conditions, but it only takes one object.

"The required conditions for the multiple-impacts scenario are more moderate, but at the moment we don't have enough information to prefer one scenario over the other," she said.

Because both scenarios are so tightly constrained, it means that metal-rich planets like Mercury are probably rare.