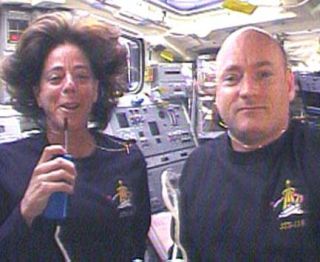 Teacher-turned-astronautBarbara Morgan and her six crewmates have a warm welcome ahead of them whentheir shuttle Endeavour arrives at the International Space Station (ISS) latertoday.

Commandedby veteran shuttle flyer Scott Kelly, Endeavour's STS-118 crew is due to dockat the ISS at 1:53 p.m. EDT (1753 GMT) after a two-day orbital chase that beganwith a Wednesdaylaunch. Tucked aboard the shuttle are about 5,000 pounds (2,267 kilograms)of fresh cargo, a loaded spare parts platform and a new piece of the spacestation's starboard-side truss.

"TheInternational Space Station is getting visitors from another planet," Anderson,who launched on NASA's earlier June shuttle flight for a crew change, told reporterslast week. "I'm really looking forward to seeing them and hopefullythey're bringing some goodies for us."

Endeavouris also equipped with a newpower transfer system designed to siphon electricity from the ISS rather thanrely on its own internal fuel cells. If successful, the system will allowEndeavour's STS-118 astronauts to extend their planned 11-day constructionmission by three extra days, NASA has said.

BeforeKelly and his crew can begin their ISSconstruction mission, the shuttle commander will fly Endeavour through abit of orbital acrobatics.

At about 12:51p.m. EDT (1651 GMT), Kelly will guide the 100-ton orbiter into a slow back flipto allow astronauts aboard the ISS to photograph Endeavour's belly-mounted heatresistant tiles. Analysts will study the resulting high-resolution images,particularly those that cover three regions where debris may havestruck Endeavour during launch, to ensure the shuttle's heat shield is fitfor the return to Earth.

"Wedid see some indications early on that things may have been, in terms of themechanism, not completely seated, but that later cleared," said Matt Abbott,NASA's lead STS-118 shuttle flight director, adding that the heat shieldphotography during docking will confirm for sure that the doors are inposition.

Endeavour'sISS arrival will be a return of sorts for two STS-118 astronauts. Missionspecialist Rick Mastracchio helped prime the station for astronaut crews duringNASA's STS-106 mission in 2000 while shuttle pilot Charlie Hobaugh helpeddeliver the orbital laboratory's U.S. Quest airlock during the STS-104 mission in2001.

"It'll be really neat to seehow it's coming along, how we're proceeding and hopefully where we'll be ableto head and go from here," Hobaugh said.