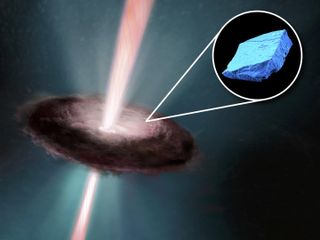 Artist's illustration of the early solar disk, with an inset image of a blue hibonite crystal, one of the first minerals to form in the solar system.
(Image: © Copyright The Field Museum, University of Chicago, NASA, ESA, and E. Feild (STScl))

Ancient and rare blue crystals from the dawn of the solar system help confirm that the newborn sun was violently active, a new study reports.

Astronomers previously found that stars are typically incredibly energetic very early in their evolution. Scientists had suspected the same was true of the sun after it was born about 4.6 billion years ago.

"The sun was very active in its early life — it had more eruptions and gave off a more intense stream of charged particles," study co-author Philipp Heck, a curator at The Field Museum in Chicago, said in a statement. "I think of my son — he's three; he's very active, too." [Solar Quiz: How Well Do You Know the Sun?]

However, proving this "early active sun hypothesis" is challenging because it is difficult to find material that recorded what the early sun was like and that also survived billions of years unscathed.

"Almost nothing in the solar system is old enough to really confirm the early sun's activity," Heck said in the statement.

To hunt for such evidence, the researchers analyzed samples from the Murchison meteorite, which crashed in 1969 near the town of Murchison, in the Australian state of Victoria. This meteorite, which is kept at The Field Museum in Chicago, dates to the early solar system and is renowned in the scientific community for its abundance of organic molecules.

As the giant disk of gas and dust that surrounded the early sun cooled down about 4.5 billion years ago, the earliest minerals began to form — microscopic, ice-blue crystals named hibonites, the largest of which were only a few times the diameter of a human hair.

"They are likely among the first minerals that formed in the solar system," study lead author Levke Kööp, a cosmochemist at the University of Chicago, told Space.com.

If the early sun spewed out lots of energetic particles, some of these should have struck calcium and aluminum in the crystals, splitting those atoms into smaller atoms of neon and helium. This evidence of an early active sun could have remained trapped unscathed within the crystals for billions of years and been incorporated into rocks that eventually fell to Earth for scientists to study.

"While noble gases are often studied to evaluate irradiation histories of samples, nobody has tried this with hibonites before," Kööp said. "This is probably because they are very small, and also because they are rare and quite hard to recover from meteorites."

The scientists analyzed the crystals using a state-of-the-art mass spectrometer in Switzerland — a garage-sized machine that can determine an object's chemical makeup. A laser melted tiny grains of hibonite crystals, and the mass spectrometer then analyzed its contents.

The mass spectrometer was specifically designed to look for traces of noble gases, such as helium and neon. The researchers found a surprisingly large signal clearly showing the presence of helium and neon.

This may be the first concrete evidence of the sun's long-suspected early activity, the researchers said.

"It is exciting that we were able to find this noble gas record in hibonites, because it strongly supports the early-active-sun hypothesis," Kööp said.

There were previous hints that the newborn sun was more active than it is today, such as traces of radioactive beryllium-10 found in ancient meteorites. However, it was possible that such beryllium-10 was not generated by early solar activity but instead was inherited from the molecular cloud from which the solar system originated. In contrast, neon and helium are noble gases, meaning they virtually never react with other chemicals. As such, their presence in the hibonites suggests they were produced inside the crystals, as opposed to somehow getting trapped within the hibonites as they formed.

Future research on ancient meteorite crystals might help reveal details about the protoplanetary disk of gas and dust around the sun that ultimately gave rise to the planets, such as how hot or cold different parts of this disk were.

"For example, helium is a very light element and is easily lost from minerals during heating," Kööp said. "The presence of helium in the hibonites means that they were not heated much after they were irradiated."

The scientists detailed their findings online Monday (July 30) in the journal Nature Astronomy.