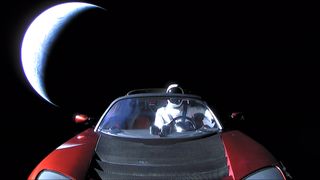 In February, SpaceX uses its Falcon Heavy rocket to launch a Tesla Roadster (and a spacesuit-clad 'Starman' dummy) into orbit around the Sun. There is a remote possibility for the unsterilized Roadster to strike Mars at some point in the distant future, potentially introducing hardy Earth microbes to the Red Planet.
(Image: © SpaceX)

Although not exactly the lawless wild west, the search for extraterrestrial life remains so speculative that meaningful regulations are few and far between. One exception is the proviso, codified in international law, to avoid potentially harmful interplanetary exchanges of biological material that could spark virulent epidemics on Earth or wipe out fragile alien biospheres.

That means avoiding "forward contamination" of other worlds by terrestrial organisms carried on spacecraft, and also preventing "backward contamination" of Earth by alien bioactive molecules that may exist in otherworldly samples retrieved for scientific study. Pratt is NASA's point person to ensure that U.S. missions follow these precautionary protocols.

Pratt's debut comes just as NASA's Office of Planetary Protection itself goes through a more profound transition. Back in July 2017 NASA announced the office was being transferred from the Science Mission Directorate to NASA's Office of Safety and Mission Assurance in Washington, D.C. That move, agency officials said, will inject more engineering rigor into the biological contamination control for outbound and inbound planetary spacecraft.

This transition, Pratt says, is coming none too soon. Just this week a new National Academies report called for NASA to rethink its planetary protection approach, particularly in light of burgeoning private sector space exploration efforts as well as the agency's plans to retrieve samples from Mars. "We're going to places where I think we will, within the next decade, have an encounter with another life-form in our solar system," Pratt said in a keynote talk during the 15th International Planetary Probe Workshop, hosted here June 11–15 by the University of Colorado Boulder.

Over the years, the motto for the office has been protecting "all of the planets, all of the time."

"It's catchy and lots of fun on bumper stickers, but it's not really what we do," Pratt said. "First of all, we don't protect every place. We try to identify places that are most vulnerable and the most habitable…and then we worry about the science that we are doing." Clearly, it is under Pratt's purview to ensure NASA avoids the forward contamination of other worlds where the space agency wishes to seek evidence of life. "It's not just the landers that have planetary protection requirements, it is the flybys and the orbiters because of the possibility that they could come down on the surface. We worry a lot about 'non-nominal' landing—obviously, that means crash. I love the terminology. I'm getting used to it," she added. Speaking to an audience of mostly young space engineers, Pratt implored them not to see planetary protection as a burden but rather a way "to solve, collectively, a set of very, very difficult challenges."

Foremost among those challenges is the need to fill in gaping holes in our knowledge of life's fundamental limitations.

Whether for Mars, ocean-bearing icy moons in the outer solar system like Jupiter's Europa and Saturn's Enceladus or other astrobiological hotspots in the solar system, scientists still lack a full understanding of the metabolic capabilities and environmental tolerances that certain Earth-born microorganisms might marshal to thrive in such locales.

For Pratt, Mars serves as the crucible in which NASA's future planetary protection policies are being forged. She views the agency's upcoming Mars 2020 rover as "a really important learning curve" — in large part because that mission is intended to cache samples for later return to Earth, some of which could have potential for hosting past or even present-day biology.

Mars is dotted with a growing list of "special regions," particularly clement areas that astrobiologists suspect could support indigenous Martian life (or, of course, hardy microbes inadvertently introduced from Earth). If life ever got started on Mars, Pratt contended, evolutionary adaption should have allowed it to keep pace with that planet's climatic changes, potentially leading to Martian microbes still surviving there today. "We've been staying away from those [special regions]," Pratt said. "But we now know that we're within 10 to 15 years of cargo drops in anticipation of humans and perhaps 30 years for [human missions]. We have to start looking at these places and doing a better job thinking about whether or not we have, in fact, systematically looked for the presence of life on Mars, present day."

Pratt's Mars-centric concerns extend beyond the Red Planet's surface, reaching up to encompass Phobos, one of Mars's two moons and a target for a sample-return mission NASA is pursuing with JAXA—the Japan Aerospace Exploration Agency. JAXA officials would like to see this snatch-and-grab venture characterized as "unrestricted" sample return. But many independent experts, Pratt noted, worry Phobos is perhaps a repository of Martian life-forms, transferred there onboard material ejected into orbit by meteorite impacts on the planetary surface far below. What risks for Earth might such remnants pose? No one really knows.

Pratt has also begun working with a new breed of commercial space ventures such as SpaceX, Blue Origin and others that are developing rockets and spacecraft to take cargo and even crews well beyond the moon to Mars or other destinations. Last February, when SpaceX's Falcon Heavy rocket tossed CEO Elon Musk's Tesla Roadster toward Mars, the event precipitated a minor planetary-protection crisis—the car had not been sterilized for an unlikely-but-possible impact with the Red Planet.

During her keynote at the workshop, Pratt made clear she has not been happy on this score. Interagency talks are underway at high levels of the federal government, she said, "trying to make sure that we know how to get it right...to ensure that the planetary protection requirements are clear and are laid out in a way that we know who has the regulatory authority."

Similarly, bread box-size "CubeSats" and other nanosatellites are increasingly appealing to public and private planners of interplanetary missions. In this realm Pratt is fretful about how to ensure cleanliness, given such spacecraft typically contain cheaper off-the-shelf parts that may not withstand the rigors of treatment with harsh chemicals or baking in ovens to achieve mandated levels of sterility.

Pratt's concerns are broadly echoed by key U.S. policy makers, such as Rep. John Culberson (R–Texas), chairman of the House Appropriations Committee that funds NASA. At a June meeting of the Federal Aviation Administration's Commercial Space Transportation Advisory Committee , he noted: "The private sector needs to be sure that we're doing planetary protection. I've not heard enough about protecting the pristine nature of worlds like Europa from Earth organisms. It's very, very important as the private sector expands and begins to launch missions to other worlds that we have the same high levels of planetary protection and sterilization for commercially, private-built spacecraft that we do for NASA spacecraft."

Pratt pointed out commercial space exploration and other pressing issues will be prime topics at the upcoming meeting of the Committee on Space Research (COSPAR) being held July 14–22 in Pasadena, Calif. During the gathering, an international confab of space experts will discuss current COSPAR planetary protection policies and implementation guidelines. As deputy organizer of this COSPAR session, Pratt is slated to talk about all the recent changes in the NASA Office of Planetary Protection.

One of Pratt's planetary protection predecessors at NASA, the astrobiologist John Rummel, is also a former COSPAR chair. At the upcoming COSPAR meeting, he says, Pratt and her peers will likely be discussing COSPAR's recent changes to its guidelines, which were made to ensure that explicit consideration is made of commercial, nongovernmental operators and their concerns.

As for NASA's Planetary Protection Office shifting into the Office of Safety and Mission Assurance, Rummel believes the bureaucratically challenging move "is a good one for planetary protection at this time, given the increased pace of astrobiology-related robotic exploration and NASA's prospects for human exploration to the moon to prepare for Mars."

Other astrobiologists, such as Dirk Schulze-Makuch, a professor at the Technical University of Berlin and an adjunct professor at Arizona State and Washington State universities, have in the past been critical of NASA's planetary protection policies, seeing them as potentially too draconian. Yet Schulze-Makuch is optimistic Pratt will provide "constructive help" to ensure an exciting future for alien-hunting scientists, nonetheless guaranteeing the safety of our own planet and avoiding unnecessary terrestrial contamination of Mars, other planets and moons. The ongoing shift in NASA's Planetary Protection Office "makes me hopeful that [Pratt] won't put up any unreasonable hurdles when new missions to planetary bodies are proposed," he says.

Follow Scientific American on Twitter @SciAm and @SciamBlogs. Visit ScientificAmerican.com for the latest in science, health and technology news.