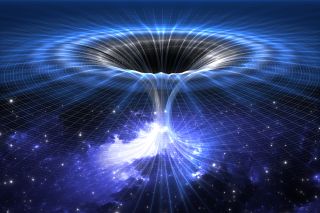 A conceptual vision of a wormhole. Could black holes actually be colliding wormholes? A new theory says maybe.
(Image: © Shutterstock)

When two wormholes collide, they could produce ripples in space-time that ricochet off themselves. Future instruments could detect these gravitational "echoes," providing evidence that these hypothetical tunnels through space-time actually exist, a new paper suggests.

But while LIGO's detection was just one of many observations supporting the existence of black holes, these exotic objects still pose theoretical problems. For instance, they seem to be inconsistent with the laws of quantum mechanics. One way to resolve these problems is if black holes were actually wormholes.

Point of no return

One of the main features of black holes is the event horizon, a region of space-time beyond which nothing can escape, not even light. If you throw anything into a black hole, it's lost forever — to an extent. Stephen Hawking discovered that, thanks to a phenomenon known as quantum tunneling, black holes could actually produce a tiny bit of radiation, which would come to be known as Hawking radiation. Over a long time, black holes could even evaporate away due to this radiation.

"But what comes out is random," said Amber Stuver, an astrophysicist at Villanova University in Pennsylvania, who was not involved in the new research. The radiation contains no clue as to what went into the black hole. [Stephen Hawking: A Physics Icon Remembered in Photos]

"In quantum mechanics, if you know everything about a particular system, then you should be able to describe its past and its future," she said. But because any information that goes into a black hole is gone for good, an event horizon doesn't jibe with quantum mechanics.

To resolve this so-called black hole information paradox, some physicists have suggested that event horizons don't exist. Instead of abysses from which nothing can return, black holes actually could be a host of speculative black-hole-like objects that lack event horizons, such as boson stars, gravastars, fuzzballs and even wormholes, which were theorized by Albert Einstein and physicist Nathan Rosen decades ago.

In a 2016 study in the journal Physical Review Letters, physicists hypothesized that if two wormholes collided, they would produce gravitational waves very similar to those generated from merging black holes. The only difference in the signal would be in the last phase of the merger, called the ringdown, when the newly combined black hole or wormhole relaxes into its final state.

Because wormholes don't have event horizons, gravitational waves that hit these objects could bounce back, producing an echo during the ringdown.

"The interior of the object is a sort of cavity where gravitational waves are reflected," the researchers of the new study told Live Science in an email. "The production of gravitational echoes is not very different from ordinary sound echoes in a valley."

In the paper, published in January in the journal Physical Review D, the team of physicists from Belgium and Spain analyzed wormholes that rotate, which are more realistic than the non-spinning variety studied in the 2016 work. They calculated what the resulting gravitational-wave signal would look like if the wormholes merged. [The 18 Biggest Unsolved Mysteries in Physics]

Because the strength of the signal drops during the ringdown, that section of the signal would be too weak for LIGO's current configuration to detect. But that could change in the future, as researchers continue to upgrade and fine-tune the instrument, the researchers said.

"By the time we are running at full design sensitivity, I believe it may be possible to resolve the ringdown phase where these echoes are predicted to be," said Stuver, who's also a member of the LIGO team.

Still, wormholes are less science fact than science fiction, often used in movies and books as intergalactic highways. For wormholes to be traversable, however, you would probably need some unknown exotic matter to keep them open. Last December, physicists came up with traversable wormholes that don't need exotic matter, but, like all wormholes, they're highly speculative. "On the other hand, the repercussions of a detection of echoes would be of dramatic importance in physics," the researchers wrote in an email to Live Science. "So, given that an actual experimental test will be available soon, it is worth exploring them."

"Now it's the time to take seriously the possibility that there are other objects which can be as massive and compact as black holes," said Vitor Cardoso, a physicist at the University of Lisbon in Portugal, who was part of the earlier study on nonspinning wormholes. "This is one of the most exciting things we can do with gravitational waves."