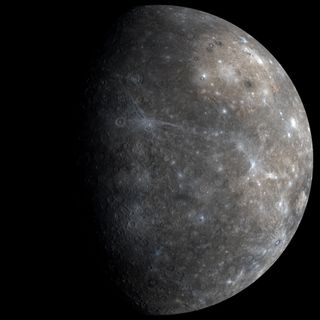 The Gravity Assist Podcast is hosted by NASA's Director of Planetary Science, Jim Green, who each week talks to some of the greatest planetary scientists on the planet, giving a guided tour through the Solar System and beyond in the process. This week, he's joined by Faith Vilas of the National Science Foundation to discuss Mercury and what we know about the innermost planet from NASA's Mariner 10 and MESSENGER missions.

You can listen to the full podcast here, or read the abridged transcript below.

Jim Green: Faith, you were researching Mercury well before the MESSENGER mission. How did you get involved in Mercury research? [NASA's Messenger Mission to Mercury (Infographic)]

Faith Vilas: Well, I was an undergraduate working with a professor over at MIT, and I wanted to do some independent study. He suggested I take a look at Mercury. Now, Mercury is not an easy object to observe from the Earth, either from the surface or even from something like the Hubble [Space Telescope], because it only goes, at most, 28 degrees away from the Sun. So, it's sort of one of those projects that you take on, and you're going to do it, and you're standing on a ladder, and you're tilting your telescope over near the horizon, and you can barely see it. You can follow it a little ways, but it's always near the Sun, which you always have to watch out for. It becomes a tricky object to observe.

Jim Green: The scientific community made some predictions about Mercury before MESSENGER actually reached it. What were some of those things that proved to be correct?

Faith Vilas: The prediction that I made that proved to be correct, which I'm grateful for, was that there were no iron oxides; there's no oxidized iron in the surface material of Mercury. This flies in the face of the fact that we know that Mercury is very heavy, it has a very large core of iron and nickel metal. Every prediction was that it was going to have plenty of oxidized iron on the surface, and I said, no, I don't see it. Then when we got there with MESSENGER, sure enough, [we found that] it's not there.

The reason people thought I may be wrong is that because Mercury is so close to the Sun, it's so hard to observe, we have to look through [more of Earth's] really thick atmosphere down near the horizon. [The seeing conditions] vary very quickly. It could affect your spectra if you're not being very careful about your observations. So, it needed MESSENGER to be able to solve that. [Scorching-Hot Mercury Has a Surprisingly Icy North Pole]

Jim Green: Was there any indication from ground-based telescopes that there could have been ice on Mercury?

Faith Vilas: Yes, there were, and they came from the radar at Arecibo in Puerto Rico. The observations were made near the poles of Mercury. The first indication was that it looked very different, and that it was maybe a signature of water-ice, but why would it be there [at Mercury's poles]? Then they continued the observations and were able, with improvements in the radar, to narrow them down to specific areas at the north and south poles.

With the images we got from Mariner 10, it was possible to show that some of these signals matched where the craters were. So, we started thinking that what's going on here is that we have craters at the poles that are in [permanent] shadow because Mercury doesn't tilt very much on its axis, so the Sun never reaches them and they can keep water and ice there as long as they want to keep water and ice there. The question then became, where did the water come from? It largely looked like it came from sources outside of Mercury; because Mercury's so close to the Sun, everything's going to be focused into crashing into it, and water-ice comets came in and impacted, and trapped a whole bunch of the water-ice at the poles.

Jim Green: What other surprises have we found on Mercury?

Faith Vilas: Everybody thought that Mercury was going be a bland and boring little planet. [People think that] Mercury looks like the Moon. It's actually significantly different than the Moon. Things that were not predicted that we did see were [the presence of] lots of other materials. We had some really unusual features and bright features, features with what we assume is sulfur, which we have not yet fully explained. One of the things that was in question when we went to Mercury was whether there was [or had been] volcanism, and there sure was. The whole planet has had flowing volcanoes at different times. [There isn't] the really super-high volcanoes, like the mountains we get on Mars and Earth, but there's obviously [been] a lot of volcanic activity on Mercury. Mercury was a very active planet at some point.

Every planet is vastly different, they all have a much more interesting history than we ever imagined. So to predict that Mercury is going to be this way because it looks this way, well, what we know that is wrong because it's always [going to be] different. I've been fortunate to live through seeing the first really good look at these planets, and I predict that there's so much more we can still learn from them. That should give us a reason to go to these objects, because we're learning new things. That is also extended to exoplanets now, too.

Jim Green: Mercury is a small terrestrial body, it's smaller than Mars and one would expect that it's probably one of the more populous [types of] exoplanet.

Faith Vilas: What's really interesting is the [large] number of exoplanets that are closer to their host star than Mercury is to our Sun. We still, I believe, think that Mercury did not form in its current location and has since moved in towards the Sun. So, we have this scenario where we see these big planets, very hot Jupiter-sized planets orbiting super close around their stars. Why are we seeing this, and does this also play back into the huge amount of diversity that we see in planetary systems, not only in our own Solar System but in other planetary systems? We're learning so much about that now.

Jim Green: This may sound crazy, but since Mercury's core is so large, comparable perhaps to the size of Earth's core, it's almost like perhaps Mercury was the core of a larger planet.

Faith Vilas: That's a thought that's been around for a long time. It's certainly a good, viable thought. It looks like it could have been a core from a larger planet, that what we see in the way of the 'crust' around Mercury now is actually just the layer that was above the core when, for some reason, the planetary surface was stripped away from the rest of the planet, which might have happened in the very early Solar System when we expect there was a huge, violent migration of objects throughout the Solar System. Things didn't just happily form in one place. They formed in other places, and then the Sun and Jupiter and Saturn got busy and kicked everything [around], and then planets hit other planets, things fragmented, asteroids hit things, and Mercury may well have hit another planet that formed elsewhere in the Solar System, and its core might have been kicked into Mercury's current location. But I don't think we fully have the answer yet.

Jim Green: The concept that there were impacts during planet migrations has led us to think about small bodies, and one set of small bodies that we're quite interested in finding are called the Vulcans. What do we know currently about them?

Faith Vilas: That we haven't found any yet. We have not found any Vulcans.

Jim Green: So, what are they?

Faith Vilas: Vulcans are asteroids that are proposed to be between Mercury and the Sun. So far, we've looked for them using all sorts of different and creative methods, and we have not found them, not with MESSENGER, not with ground-based work, not with space-based work. We've seen plenty of objects between Venus and Earth, and Earth and Mars, and then of course there is the very heavy concentration of asteroids between Mars and Jupiter. But, we do not see anything between Mercury and the Sun. We see comets come through and crash into the Sun, but we haven't seen any asteroids in that area. [Inside Planet Mercury (Infographic)]

Jim Green: We also have to think about our Solar System as a point in time. As you point out, there's been quite a bit of evolution. So when we look at other planetary systems, they are at a different point in time in their evolution. We are still in an evolving Solar System.

Faith Vilas: [The Solar System] is not a dead system by a long shot. My reaction to what you're saying is sort of mixed, because a lot of the other systems that we see with exoplanets around other stars, many of them are solar-like stars, and ultimately we're looking for life, let's face it. We're looking for the life that we know about, and so, in looking for life as we understand it, which is carbon-based, we look for the types of objects that [would support that]. Kepler looked at a group of solar-like stars. Our ground-based observations look at solar-like stars, as well as the cooler stars and sometimes I'm sure the hotter ones, as well. We see disks of dust around other stars, which is what we expected to see and is what we think our Solar System started out like. Now we're beginning to see some disks that have gaps where planets have formed. It's truly amazing what we're seeing, [which is] all sorts of variations and different types of planets, we're seeing planets at different moments in formation, things I never thought I would see in my lifetime.

Jim Green: You've led an exciting scientific life. What was the 'gravity assist' that got you interested in planetary science?