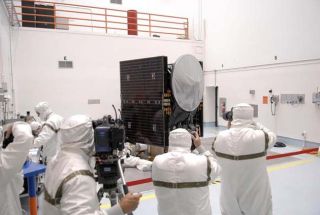 NASA'sbeleaguered Dawn asteroid probe will have to wait at least one more day tolaunch after lightning prevented workers from fueling the spacecraft's rocketThursday.

The delayis the latest in a series of difficulties for NASA while preparing Dawn for its$449 million mission to study the asteroidsVesta and Ceres.

In recentweeks, the mission managers have repaired last-minute damage to thespacecraft's solar arrays, weathered the late delivery of rocket parts thatdelayed Dawn's planned June 20 liftoff, and wrestled with a malfunctioningcrane while assembling the probe's Delta 2 booster. Mission managers also neededmore time to study the impact of higher than expected loads on parts of theDelta 2's solid rocket motors and substitute a launch tracking ship with anaircraft.

The Dawnspacecraft, too, has traveled a rocky road to the launch pad. NASA initially canceledthe asteroid-bound mission in March 2006 due to cost overruns and technicalchallenges with the probe's xenon-powered ion engine. But the space agency reinstated themission a few weeks later after an in-depth study into those hurdles.

Researchershope the 2,684-pound (1,217-kilogram) Dawn spacecraft will answer questions onthe formation of Vesta, which sports signs of lava flows on its surface, and potentiallywater ice-harboring Ceres. The probe is due to swing by Vesta in October2011 and then rendezvous with Ceres in February 2015.

NASA'swindow to launch Dawn closes on July 11, when the space agency will shift overto prelaunch preparations for the MarsPhoenix lander and the shuttle Endeavour. Phoenix is slated to launch onAug. 3 and be followed by Endeavour's STS-118 mission to the InternationalSpace Station on Aug. 7.

If Dawnmisses its July launch window, it would be delayed until later this fall andcost an extra $25 million due to the need to replace the spacecraft's Delta 2rocket's second stage, mission managers have said.