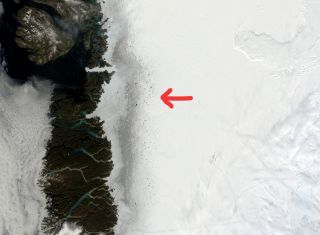 Satellite images reveal the dark zone of the Greenland ice sheet, which is leading to a positive feedback effect where melt begets melt.
(Image: © MODIS/NASA)

From above, Greenland's ice sheet looks like a vast field of brilliant white — for the most part. In the summer months, the western margin is shaded by a dark zone that seems to have gotten darker in recent years, threatening to speed up the rate of melting.

A new study offers an explanation for the phenomenon, putting the blame on impurities like carbon and ice-dwelling algae.

"What we show is that the dark zone is covered in a finely distributed layer of dust and black carbon, which provide nutrition for dark-colored algae," study co-author Alun Hubbard, a professor at Norway's Centre for Arctic Gas Hydrate, Environment and Climate, said in a statement. [Photos: Under the Greenland Ice Sheet]

The ice sheet covers more than 80 percent of Greenland's landmass —about 656,000 square miles (1.7 million square kilometers), an area three times the size of Texas, according to the National Snow and Ice Data Center. The ice is more than a mile thick on average, and it holds 8 percent of the world's fresh water. If it melts completely, global sea levels would rise about 23 feet (7 meters), according to NASA.

Because of that disastrous prospect, scientists have been trying to understand why the shrinking of Greenland's ice sheet has been accelerating over the past few decades.

Blindingly white snow and ice have high reflectivity, or albedo, meaning they reflect more of the sun's energy than they absorb. Dark patches and meltwater, however, absorb more energy and can induce a positive feedback that leads to even more melting in an ice sheet. So, the dark zone in Greenland has become a focus of some recent research.

"The fact that a large portion of the western flank of the Greenland ice sheet has become dark means that the melt is up to five times as much as if it was a brilliant snow surface," Hubbard said.

Hubbard and his colleagues went to Greenland in August 2014 and used a hand-launched drone to capture high-resolution images of a section of the dark zone. While crevasses and pools of meltwater explained some of the dark spots, the researchers observed that the majority of the shadowy surfaces had a uniform coating of impurities. These impurities include trapped dust and soot that have accumulated over the years from faraway fires and factories, as well as dark-colored algal blooms from microbes that, scientists recently discovered, can thrive in Greenland's harsh environment.

The findings were published in the journal Nature Communications last month.

The scientists wrote that the nature and drivers of the impurities in the ice sheet are not yet fully understood. But some recent research has suggested that there could be another complex feedback effect in the dark zone: algal blooms fueled by some of the impurities that get trapped in the ice.

"The algae need nutrients and food, essentially dust, organic carbon and water," Hubbard explained in the statement. "In summer, these are plentiful, and the algal bloom takes off. Because algae are dark in color, they reinforce the dark zone. Thereby you get a positive feedback effect where the ice sheet absorbs even more solar radiation, producing yet more melt."