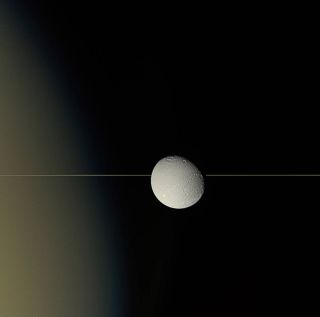 NASA's Cassini spacecraft captured this photo of the Saturn moon Dione, with the gas giant's rings edge on in the background, on Aug. 17, 2015. Cassini was about 66,200 miles (106,500 kilometers) from Dione at the time.
(Image: © NASA/JPL-Caltech/Space Science Institute)

Saturn's icy moon Dione hovers against the thin line of the gas giant's edge-on rings in a gorgeous photo by NASA's Cassini spacecraft.

Some scientists think Dione may harbor a subsurface ocean of liquid water, just like fellow Saturn moon Enceladus and the Jupiter satellites Europa, Ganymede and Callisto.

The Cassini orbiter was the centerpiece of the $3.2 billion Cassini-Huygens mission, a collaboration involving NASA, the European Space Agency and the Italian Space Agency. The mission launched in October 1997 and arrived in the Saturn system in the summer of 2004. In January 2005, the piggyback Huygens lander touched down on Saturn's biggest moon, Titan, pulling off the first-ever soft landing on a body in the outer solar system.

The Cassini mothership ended its life with an intentional plunge into Saturn's atmosphere on Sept. 15, 2017. This death dive was performed to ensure that Cassini, which was running low on fuel, would never contaminate Enceladus or Titan with microbes from Earth. Many astrobiologists think that both of these moons may be capable of supporting life as we know it.