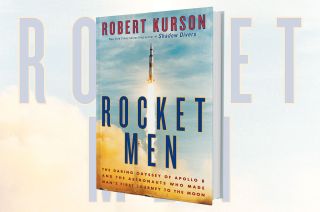 Cover art for "Rocket Men: The Daring Odyssey of Apollo 8 and the Astronauts Who Made Man's First Journey to the Moon" by Robert Kurson.
(Image: © Random House via collectSPACE.com)

Robert Kurson was there to see a submarine.

The author of the 2004 bestseller "Shadow Divers" about the discovery of a World War II German U-boat off the coast of New Jersey, Kurson was at the Museum of Science and Industry in his hometown of Chicago to see a similar submarine when he happened across the exhibit of a space capsule.

The sight of the Apollo 8 command module and a nearby placard explaining that it had carried the first humans to fly to the moon caught Kurson's attention. Reading more about Frank Borman's, Jim Lovell's and Bill Anders' journey after he returned home, Kurson came to a realization, "this is the best space story of them all." [Leaving Home: The Legacy of Apollo 8]

Kurson's encounter with the Apollo 8 spacecraft ultimately led him to interviewing its crew and then authoring "Rocket Men: The Daring Odyssey of Apollo 8 and the Astronauts Who Made Man's First Journey to the Moon," published Tuesday (April 3) by Random House.

collectSPACE.com spoke with Robert Kurson a day before he reunited with the Apollo 8 crew at the Museum of Science and Industry on Thursday (April 5), where a sold-out event would mark the launch of "Rocket Men."

collectSPACE (cS): Given your original impetus for writing "Rocket Men," were it you lived or were visiting San Diego, for example, and you had come across the Apollo 9 command module instead, would you have ended up writing a book about that mission?

Robert Kurson: "No, Apollo 8 is magical and singular.

"It struck me about how little I knew about it when I got home and started to read about it, but the fact that it was mankind's first journey away from Earth and man's first journey to the moon made it absolutely exceptional and unique to me in terms of human exploration.

"And on top of that, there were the incredible risks they were taking. The amount of time that was allowed for it, just four months when a 'normal' spaceflight might take 10 to 15 months [of preparation]. The fact they were making the first manned flight of the Saturn V when it had only been tested twice, the second time of which was a near disaster.

"The fact they were going without a lunar module, which acted as backup engine, meaning that if their primary engine didn't function at the moon properly there was all kinds of disaster waiting them. And so many more risks and firsts involved that made it the greatest space story ever told."

cS: You were just five years old when Apollo 8 launched to the moon in December 1968. Do you have memories of the mission?

Kurson: "I have vague memories of being in first grade and the teacher stopping class. I am not even sure if it was for Apollo 8, but I have this series of memories of being very young and being in grade school and having the classroom stopped and a little black and white TV that was bolted to the wall turned on and watching these images of these guys doing something that seemed absolutely incredible.

"The whole class was watching, both boys and girls, just staring in wonder at what mankind was attempting. And somehow, even at age five and six and seven, we knew that something incredible was occurring."

cS: The title, "Rocket Men," seems to focus more on the means of travel than the destination. Was that your intention?

Kurson: "I think the operative word is 'men.' It's not just about the three astronauts but about humanity and the idea that they were doing something so extraordinary and so dangerous and so ambitious.

"The word 'rocket' to me represents all of that and goes far beyond just the Saturn V. It represents the United States and its hopes, dreams and highest ambitions.

"So 'rocket' and then 'men,' the latter meaning all of humanity, not just these three men or men in general. Those two words represented everything to me."

cS: You note in "Rocket Men" that much of it was based on the interviews you did with Borman, Lovell and Anders. If you didn't have access to the astronauts, could you still have written the book?

Kurson: "I think that having access to them was essential.

"I've always written stories about people I could sit down with, not just to interview, but really get to know. I think you get the best details that way. Sometimes they're small details but they are the best almost invariably.

"So it is hard for me to now look back and think I could have written anything near to the kind of book I wrote if I didn't have access to all three crew members."

cS: That the astronauts agreed to sit down with you seems to have been helped along by the fact that Lovell had listened to the "Shadow Divers" audiobook while driving, even "orbiting" a parking lot to continue listening. That book focuses on a submarine and you compare the Apollo 8 command module to a submarine a few times in "Rocket Men." Are there parallels between writing the two books?

Kurson: "There are parallels between a submarine and an Apollo spacecraft that is traveling toward the moon. They are both very close quarters and you don't see much.

"I was very surprised to learn when I started to unpack the story of Apollo 8 that the astronauts really did not see the moon until they were just minutes away from it. I always pictured them seeing it off in the far distance, but that was not the case. They saw Earth grow smaller virtually before their eyes, but not the moon. So this idea of having to trust where you are going in the dark, so to speak, was common to the Apollo 8 story and to 'Shadow Divers.'

"But there were also the risks that these guys were undertaking. The dedication to country is so powerful in both stories. I am drawn to that kind of thing, where there was a higher purpose and a calling beyond one's own selfish concerns. I think that runs through all my stories."