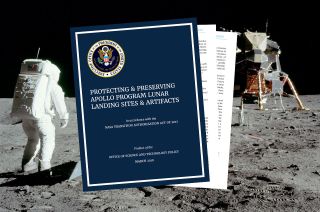 The White House Office of Science and Technology Policy advises on Protecting and Preserving Apollo Program Lunar Landing Sites and Artifacts in a new report submitted to Congress.
(Image: © NASA/OSTP)

The White House believes there is value in protecting and preserving the Apollo moon landing sites for historic, cultural and scientific reasons, but has qualms about hindering future commercial pursuits or entering into new international treaties to do so.

The administration outlined its position in a report provided to Congress on March 21. The assessment, conducted by the White House Office of Science and Technology Policy (OSTP), fulfilled the requirement for such a report that was included in the NASA Transition Authorization Act of 2017, which President Donald Trump signed into law in March of last year.

The report arrives three months after the President called for NASA to refocus on returning humans to the surface of the moon. White House Space Policy Directive 1 (SPD 1), signed by Trump in December, reintroduced the moon as a future destination for astronauts. [Trump's 2019 NASA Budget Request Puts Moon Ahead of Space Station]

"The effort... toward returning humans to the moon should be leveraged when considering opportunities to preserve and protect lunar artifacts," the report reads.

The report devotes most of its eight pages to reviewing the status of the six sites where Apollo missions touched down on the moon between July 1969 and December 1972, the benefits of preserving the artifacts left on the lunar surface and the existing legal foundations that provide for the sites to be left undisturbed.

"The moon continues to hold great significance around the world. The successes of the Apollo missions still represent a profound human technological achievement almost 50 years later and continue to symbolize the pride of the only nation to send humans to an extraterrestrial body," states the report.

Beyond preserving the Apollo landing sites for their historic and cultural value, the OSTP also sees a scientific value in revisiting one or more of the sites in the future.

"Very little data exist that describe what effect temperature extremes, lunar dust, micrometeoroids, solar radiation, etc. have on such man-made material," the OSTP states, "and no data exist for time frames approaching the five decades that have elapsed since the Apollo missions."

"The Apollo artifacts and impact sites have the potential to provide unprecedented data if lunar missions to gather and not corrupt the data are developed," the OSTP continues. "These data will be invaluable for helping to design future long-duration systems for operation on the lunar surface."

To serve that end, the report cites a set of non-mandatory recommendations devised by NASA in 2011 to protect the Apollo sites and the United Nations' Outer Space Treaty of 1967, which defines international space law.

The earlier, the report states, can "inform lunar spacecraft mission planners [who are] interested in helping preserve and protect lunar historic artifacts." The latter confirms that the United States retains "jurisdiction and control" over the Apollo hardware and that nations are to cooperate with the interests of those party to the treaty.

"Other states could be liable to damage ... [and] although not specifically about lunar artifacts, these provisions could be leveraged to discourage activities that would put those artifacts at risk," the OSTP found. [Apollo 11 Moon Landing Site Seen in Unprecedented Detail]

The report accepts that international and commercial plans to send robotic spacecraft and humans to the moon could cause "a significant amount of damage," including landing on top or too close to the Apollo sites or sandblasting away footprints and treads with their thruster exhaust plumes.

The risks aside, the OSTP notes the government's support for "commercialization of the space sector and commercial robotic missions to the moon."

"Risks to damage lunar heritage sites must be balanced against other national and international interests. The lunar heritage sites can be protected, at a reasonable cost, while still fostering commercial space activities and government-sponsored missions back to the moon," the reports reads.

With regards to other countries' lunar ambitions, the report recommends that the State Department, NASA and other agencies should investigate developing "non-binding best practices for preserving and protecting lunar artifacts on a 'reciprocal, transparent, and mutually beneficial' basis." It draws a line though, at calling for new or modified treaties.

"The difficulties and risks of negotiating and bringing such [a multilateral] agreement or amendments into force would likely outweigh any benefits," the report reads.

Some might see a U.S.-led effort to protect the artifacts as a "subterfuge" for claiming lunar property rights, creating a possible mechanism to "plant the flag" and claim additional territory in the future under the guise of preservation," the OSTP argues. "The effort could lead to a backlash against any new international protections, and even undermine the existing legal protections."

In addition, the report advises that attempts to create new legally-binding international law could serve to undermine the U.S. position that current space law is "sufficient," and prompt other states to pursue their own initiatives, some of which might not be consistent with U.S. national interest.

New treaties aside, the OSTP concludes its report with the recommendation that NASA, the State Department and the relevant other U.S. agencies should "discuss the pros and cons" of starting international dialogues "on the best ways to mitigate the risks of future human and robotic missions to the lunar artifacts of the U.S. and other countries."