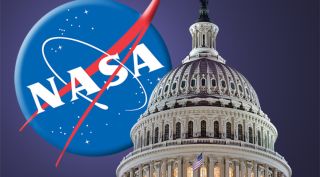 The final omnibus appropriations bill for fiscal year 2018 gives NASA more than $20.7 billion, an increase of more than $1.6 billion over the administration's original request.

WASHINGTON — A final fiscal year 2018 spending bill released by House and Senate appropriators March 21 would give NASA more than $20.7 billion, far above the administration's original request.

The omnibus spending bill, completed after weeks of negotiations, restores funding for Earth science and education programs slated for cancellation by the White House and includes additional money for the agency to build a second mobile launch platform for the Space Launch System.

The appropriations bill gives NASA $20.736 billion for the 2018 fiscal year, which started more than five and a half months ago. That is more than $1.6 billion above the administration's original request of $19.092 billion. A House appropriations bill offered NASA $19.872 billion and its Senate counterpart $19.529 billion. An overarching two-year budget deal reached earlier this year raised spending caps for both defense and non-defense programs, freeing up additional funding. [From Ike to Trump: Presidential Space Visions Through History]

Appropriators used that additional funding to, in part, restore programs slated for cancellation in the original request. Four of the five Earth science programs the administration sought to cancel — the Plankton, Aerosol, Cloud, and ocean Ecosystem (PACE) mission, the CLARREO Pathfinder and Orbiting Carbon Observatory 3 instruments and the Earth observation instruments on the Deep Space Climate Observatory spacecraft — are explicitly funded in the request. A fifth program, the Radiation Budget Instrument, was already cancelled by NASA earlier this year because of technical and programmatic issues.

The budget also provides $100 million for NASA's education program, which the administration had sought to close down. That proposal received wide bipartisan criticism in the House and Senate last year, whose appropriations bills restored funding. The Restore-L satellite servicing mission, which the administration sought to convert into a more general, and much smaller, technology development program, receives $130 million in the bill.

The White House once again seeks to shutter NASA's education program in its fiscal year 2019 request, along with the same Earth science missions targeted for cancellation in the 2018 request.

NASA's Wide Field Infrared Survey Telescope (WFIRST), another mission slated for cancellation in the 2019 budget request, received $150 million in the 2018 omnibus bill. The report accompanying the bill makes no reference to the proposed cancellation but does direct NASA to provide to Congress a lifecycle cost estimate for the mission within 60 days, including any additions needed to make it consistent with a "class A" risk classification, as identified in an independent review of the program last fall.

NASA's James Webb Space Telescope receives $533.7 million, the exact amount requested by the administration. As in past years, the bill includes language directing NASA to treat any increase as meeting a 30 percent under federal law. That law requires NASA to both provide a report on the size and cause of the overrun as well as prohibiting spending on it starting 18 months later unless authorized to continue by Congress. NASA officials said March 20 that a determination of any breach of the program's $8 billion cost cap caused by further delays in its development could be announced as soon as next week.

The agency's planetary science program received more than $2.2 billion in the bill, an increase of $300 million over the request. It includes $595 million to continue work on the Europa Clipper mission and follow-on lander, and retains provisions from prior bills calling on using the SLS for launching Europa Clipper by 2022 and the lander by 2024. The report also provides $23 million for a proposed helicopter NASA is considering including on the Mars 2020 rover mission.

NASA's exploration programs also win additional funding in the bill, with the omnibus providing $2.15 billion for SLS and $1.35 billion for Orion, the same levels as in both the House and Senate bills but above the original request.

The bill includes $350 million to build a second mobile launch platform. NASA considered, but did not request, funding in its 2019 proposal for a second platform, which outside advisers said could shorten the gap between the first and second SLS missions by avoiding delays caused by modifying the platform to accommodate the larger version of the SLS used on second and subsequent missions.

The House is expected to take up the full omnibus bill on March 22, followed immediately after by the Senate. The government is currently operating on the latest in a series of stopgap funding bills, known as continuing resolutions, that expires March 23.