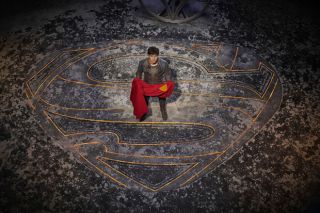 The sigil of the House of El may look like an "S" on Earth, but on "Krypton," the symbol stands for "derivative."

In many ways, that might be considered a best case scenario for the SyFy prequel, which aims to explore the DC Universe before Superman in the same way that "Gotham" did with Batman over at Fox. But without the colorful rogues of "Gotham," how can a long-dead civilization like "Krypton" hope to catch up?

"Krypton" aims to close the gap with a beautiful cast, some gorgeous production values... and a patchwork plot that stitches together tropes from almost every major sci-fi franchise you can think of. Beyond its glossy surface, "Krypton" is the kind of series that feels so referential to modern classics that it hardly makes any kind of meaningful statement for itself, making a long-term commitment feel more like an uphill battle. [The Best Sci-Fi TV Shows of All Time]

From the jump, "Krypton" doesn't try to be subtle about riding in on Superman's coattails — its very opening sequence is straight out of the Richard Donner films. The pilot works hard to wow us with its alien vistas as we get to see a Kryptonian trial in process, but instead of exiling genocidal maniacs like General Zod, here we witness the death of Superman's great-great-grandfather Val-El, who has been tried for treason against the unsettling-looking Voice of Rao. Witnessing all this is Val's grandson Seg-El, whose entire family is stripped of their caste rank in the face of their patriarch's transgressions. [The 10 Greatest Superman Villians of All Time]

With this immediate bloodshed, you'd be forgiven if you saw shades of Peter Parker or Bruce Wayne in this story, but soon writers David S. Goyer and Damian Kindler jump a decade and a half into the future, when Seg-El suddenly becomes a pretty shameless lift of J.J. Abrams' Captain Kirk — a hunky scofflaw who looks good in a leather jacket and isn't afraid to give (or take) a punch. Of course, their casting proves to be savvy — Cameron Cuffe gives off a smolder not unlike that of Tom Hardy, bringing a natural charisma that lets him transcend the hokiness of being Superman's grandpa. That said, his edginess in the role also feels like it runs a little counter to the Superman mythos as a concept — whereas Clark Kent is popularly known as a pure symbol for hope, Seg-El feels rakish, surly and even a little bit seedy, putting" Krypton" at risk of forgetting exactly what it's trying to invoke.

But before we're able to really get settled with Seg-El and his parents as they scrape their way across the impoverished edges of Krypton, we're thrown face-first into a barrage of plot points ranging from an unlikely invitation into Kryptonian high society, a trek to the outskirts of the city with a rebel agent that evokes Tron: Legacy, and a Kryptonian soldier whose training feels straight out of 300. There's so much going on that you'd almost feel out of breath — but it feels like the plot is moving forward so relentlessly at the cost of building up Seg-El or his supporting cast as actual characters. That could wind up being to "Krypton's" detriment, as there's little familiarity to anchor this series with viewers with even passing knowledge of the franchise - the alien society feels underdeveloped despite the larger-than-life settings, the names of the characters are almost impossible to follow, and even the Easter eggs to the greater DC Universe feel more utilitarian than anything else.

And yet, it's that same Easter egg that gives "Krypton" its greatest twist. Without giving too much away, "Krypton" winds up borrowing heaviest of all from the Terminator and Back to the Futurefranchises, to the point where any comparison would be unavoidable. In some ways, it's a savvy move — it gives "Krypton's" story some urgency beyond it being just a self-determined prequel like Gotham, and is an interesting introduction to another DC character, gamely played by Shaun Sipos. But the seams can't help but show a bit here, particularly when Sipos' character give Seg-El a ticking time clock of sorts that feels both all-too-recognizable and more than a little hokey.

Ultimately, a show like "Krypton," like "Gotham" and "Agents of S.H.I.E.L.D." before it, can't help but feel a bit more dubious as a launchpad than DC's well-deserved successes on the CW, in part because the audience is expected to invest in a superhero world without any actual superheroes in it. "Krypton," in some ways, doubles down on this, asking readers to jump in on a world that most people only know of based on its total annihilation. There is some good work done here in terms of its charismatic cast and its strong designs — but the actual storytelling in "Krypton" might prove to be more deadly to this show's future than any sort of radioactive material.