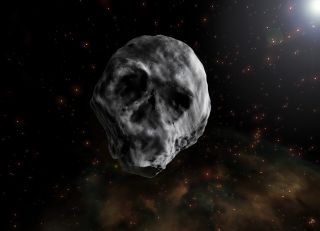 Astronomers will soon get another look at the big, ghoulishly weird space rock that buzzed Earth on Halloween three years ago.

A Halloween flyby was quite appropriate, it turned out: Observations made at the time by a variety of instruments revealed that 2015 TB145 looks like an enormous skull, at least from some angles. [These Scary Things In Space Will Haunt Your Dreams (Photos)]

Astronomers also determined that the asteroid likely completes one rotation every 2.94 hours and that it reflects just 5 or 6 percent of the sunlight that hits it.

"This means that it is very dark, only slightly more reflective than charcoal," Pablo Santos-Sanz, an astrophysicist at the Institute of Astrophysics of Andalusia in Spain, said in a statement today (Dec. 20). He co-authored a study about 2015 TB145's characteristics that was published in February 2017 in the journal Astronomy & Astrophysics.

The asteroid may actually be an extinct comet that has lost its water and other volatile materials after many laps around the sun, researchers have said. Each of those laps takes 3.04 Earth years — which means 2015 TB145 will make another swing by our planet in mid-November 2018.

This next flyby won't be nearly as dramatic as the last one; the asteroid will zoom past at about 105 Earth-moon distances. But Santos-Sanz and other researchers are still looking forward to it.

"Although this approach shall not be so favorable, we will be able to obtain new data which could help improve our knowledge of this mass and other similar masses that come close to our planet," Santos-Sanz said in the statement.