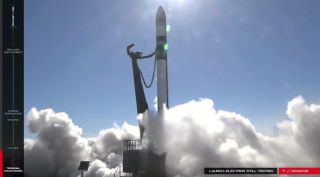 The second launch of a Rocket Lab Electron booster, seen here during an aborted launch try on Dec. 11, 2017, has been delayed until early 2018, the company said Dec. 16.
(Image: © Rocket Lab)

WASHINGTON — Stymied by poor weather and technical glitches, including one that aborted a launch just two seconds before liftoff, Rocket Lab said Dec. 16 it will delay its next Electron launch attempt until early 2018.

In a statement, the company said it had corrected the latest problem to postpone the launch, a power fault that scrubbed a launch attempt Dec. 14 (U.S. time) from the company’s launch site on New Zealand's Mahia Peninsula.

However, it said, “with only one day remaining in the launch window Rocket Lab has made the decision to delay an attempt until the new year.” The company’s original 10-day launch window was scheduled to end Dec. 16, U.S. time, although the company said earlier in the week it had considered working with local authorities to extending that window by several days. [Watch: Rocket Lab's 1st Test Flight]

Rocket Lab said in its statement that the decision not to extend the window was made “in order to preserve crew rest,” and that a new launch window will be announced early next year.

The company was initially forced to delay several launch attempts when winds exceeded conservative limits set by Rocket Lab for this launch. Conditions improved to permit a launch attempt on the evening of Dec. 11. The countdown was aborted two seconds before liftoff, though, when computer systems detected a problem with the rocket. Rocket Lab later said liquid oxygen temperatures in one of the rocket’s nine first-stage engines was higher that allowed, which it blamed on the warm afternoon temperatures at the launch site.

The company rescheduled the launch for Dec. 13, but scrubbed it due to high upper level winds. A Dec. 14 launch attempt was then scrubbed because of a power fault with an unspecific element of the vehicle discovered during ground checkouts.

When it does take place, this will be the second launch for the Electron, a small launch vehicle capable of placing up to 150 kilograms into a sun-synchronous orbit. The first Electron launch in May failed to reach orbit, which the company later said was due to a telemetry problem that triggered range safety systems about four minutes after liftoff, and not a problem with the rocket itself.

This launch, dubbed "Still Testing" by Rocket Lab, does carry satellite payloads in addition to test instrumentation: two Lemur-2 cubesats from Spire, a company that operates a constellation of ship-tracking and weather satellites; and one Dove cubesat from Planet, which has a constellation of Earth imaging satellites.

Rocket Lab originally planned a campaign of three test flights before entering commercial service, but the company said that if this second launch is successful, it will likely proceed directly into commercial missions.