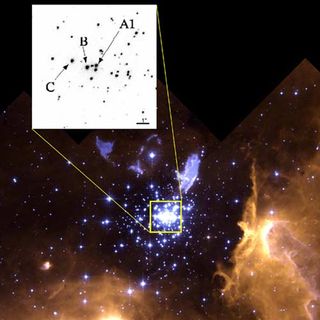 Hubble Space Telescope images of the young star cluster NGC 3603 showing the position of the newly-weighed most massive star "A1" and its companion "C".
(Image: © HST/Universite de Montreal)

The mostmassive star known in the universe has been discovered and "weighed,"astronomers announced today.

The star, partof a binarysystem, topped the scales at 114 times the mass of the sun.

Thoughastronomers suspected that stars with masses up to 150 times the mass of thesun must exist, this discovery marks the first time a star has broken the 100-solar-massbarrier. The previous record holder was only a measly 83 solar masses.

The newlyweighed star, known simply as A1, is the brightest hot star at the heart of agiant, but dense, young star cluster called NGC 3603, which lies 20,000 light-yearsfrom Earth. The star?s companion has a mass 84 times that of the sun.

These massivestars were ?weighed? by inspecting their orbits with the Very LargeTelescope and combining that data with eclipses observed by the Hubble SpaceTelescope.

Stars havea mass limit of 150 solar masses because above that, the pressure pushingoutward from the star overwhelms the inward pull of gravity and causes the starto become unstable.

In the earlyuniverse, however, stars with masses up to several hundred times that ofthe sun are believed to have existed because the pressure in the stars was notas high because the heavier elements had not yet been ?cooked? by the nuclearfusion taking place in the cores of stars.

Thediscovery was announced at the annual meeting of the Canadian AstronomicalSociety.