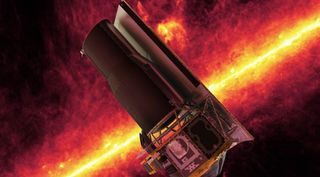 WASHINGTON — NASA is considering handing over operations of one of its flagship "Great Observatories" to a private organization that would also be responsible for funding the spacecraft.

In a request for information (RFI) issued Oct. 12, NASA said it was looking for U.S.-based institutions interesting in taking over operations of the Spitzer Space Telescope after NASA funding for the infrared observatory ends in 2019. Responses are due by Nov. 17.

"We would be thrilled if there was a non-NASA party interested in funding the operations Spitzer for their own purposes beyond the end of our mission," said Paul Hertz, director of NASA's astrophysics division, during an Oct. 18 meeting of the Astrophysics Advisory Committee.

NASA's current plans call for operating Spitzer through March of 2019 to perform preparatory observations for the James Webb Space Telescope. That schedule was based on plans for a fall 2018 launch of JWST, which has since been delayed to the spring of 2019. Under that plan, NASA would close out the Spitzer mission by fiscal year 2020. [The Spitzer Space Telescope Explained]

That plan was intended to save NASA the cost of running Spitzer, which is currently $14 million a year. The spacecraft itself, though, remains in good condition and could operating well beyond NASA's current plan.

"The observatory and the IRAC instrument are in excellent health. We don't have really any issues with the hardware," said Lisa Storrie-Lombardi, Spitzer project manager, in a presentation to the committee Oct. 18. IRAC is the Infrared Array Camera, an instrument that continues operations at its two shortest wavelengths long after the spacecraft exhausted the supply of liquid helium coolant.

The one challenge for extended operations of Spitzer, though, is the spacecraft's orbit around the sun. Spitzer is in an Earth-trailing orbit that causes the spacecraft to drift further away from the Earth each year, complicating communications. As of October 2017, Spitzer was about 235 million kilometers from the Earth.

In addition to the increasing distance, the spacecraft has to pitch to larger angles from the sun in order to point at the Earth for transmitting data. During the prime mission, Spitzer never turned more than 30 degrees from the sun, but that angle has increased by necessity during its extended mission as the spacecraft's orbital geometry changes.

"When were pitch beyond 30 degrees, the solar panels aren't charging as efficiently, so we have to manage the use of the batteries," Storrie-Lombardi said. That maximum pitch angle is increasing each year, limiting the duration of communications passes. She said the spacecraft operations should be feasible at least through November 2020.

Operations beyond March 2019, though, would require non-NASA funding. The RFI asked organizations interested in taking over Spitzer operations several questions about funding, including how they would raise the money and how long it would take. The RFI also asks when the interested organization would be able to take over operations, and how they would carry out an observing program using Spitzer.

NASA, according to the RFI, would provide continued access to the Deep Space Network for Spitzer. Spacecraft and mission operations, currently handled at the Jet Propulsion Laboratory and Lockheed Martin, would remain there, as would part of the science operations at NASA's Infrared Processing and Analysis Center on the campus of Caltech.

There is precedent for handing over a NASA science mission to a private organization. In 2012, NASA transferred the Galaxy Evolution Explorer, or GALEX, mission to Caltech after nine years of NASA-led operations. Caltech funded operations of GALEX for another year before the spacecraft was decommissioned.

Spitzer, originally known as the Space Infrared Telescope Facility, launched in 2003 as the last of NASA's "Great Observatories," a series of large space telescopes designed to observe the universe at different electromagnetic wavelengths. Two other Great Observatories, the Hubble Space Telescope and the Chandra X-Ray Observatory, remain in operation. The fourth, the Compton Gamma-Ray Observatory, was deorbited in 2000, nine years after its launch.