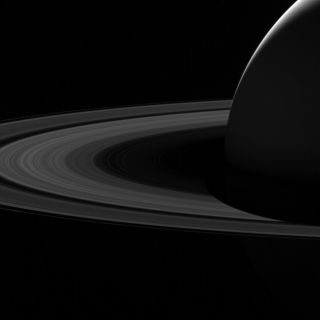 This view looks toward the sunlit side of the rings from about 7 degrees above the ring plane. The image was taken in visible light with the wide-angle camera on NASA's Cassini spacecraft on June 7, 2017.
(Image: © NASA/JPL-Caltech/Space Science Institute)

While the Cassini spacecraft is dead — engineers deliberately plunged it into Saturn's atmosphere on Sept. 15, ending its 13-year mission around the planet — analyzing the reams of data from the mission will take decades, NASA said in a statement, as new insights were released this week from the spacecraft's final days.

"There are whole careers to be forged in the analysis of data from Cassini," Linda Spilker, the mission's project scientist at NASA's Jet Propulsion Laboratory in California, said in a statement. "In a sense, the work has only just begun."

Cassini's main goal was to learn more about the nature of Saturn and its moons, as the planet moved through its 29-year orbit around the sun. The spacecraft returned data in droves, yielding insights into a mysterious hexagon storm at one of Saturn's poles, water geysers that spurt on the moon Enceladus, and a possible prebiotic chemistry on the moon Titan.

With the mission low on fuel, Cassini plunged into Saturn a month ago after making several daring dives between the planet and its famous rings. On Oct. 16 at a meeting of the American Astronomical Society Division for Planetary Science, scientists revealed new insights from those final days.

While showing pictures and videos of Saturn's rings, researchers said there are some features in those rings that have similar processes to those that birth exoplanets. For example, ring features called propellers — wakes in the rings generated by moonlets — are similar to baby planets growing in the gas discs surrounding young stars. The day before Cassini died, said Cassini participating scientist Matt Tiscareno of the SETI Institute, the spacecraft captured images of all six propellers that it tracked during its mission: Blériot, Earhart, Santos-Dumont, Sikorsky, Post, and Quimby.

Methane is raining down from Saturn's rings

Cassini's ion and neutral mass spectrometer captured the first-ever measurements of Saturn's upper atmosphere, which extends almost as far as the planet’s rings. The team, which included Cassini participating scientist Mark Perry from the Johns Hopkins University Applied Physics Laboratory, not only discovered water raining down from the rings, but also methane, which was a surprise, since the team expected the gas was too volatile to survive within Saturn's rings or its atmosphere.

We may soon know the length of a day on Saturn

Since Cassini's final orbits brought it closer to the planet, its magnetic field measurements are much more sensitive. The more detailed data could be a boon for researchers such as Michele Dougherty, leader of Cassini's magnetometer team from Imperial College London, who is trying to figure out the length of a day on Saturn. Scientists expect that by learning the magnetic field's tilt, they'll be able to determine the planet's internal rotation — an indication of a day’s length. Scientists said if the magnetic field tilt is greater than 0.016 degrees, they should be able to "nail down the true length of the planet's day."

One of the enduring mysteries of Saturn is what force holds its rings together. Models indicate that something is constraining the rings, otherwise the rings would have spread out a few hundred million years after Saturn's birth, as faster-moving particles closer to the planet crashed into slower-moving ones farther away. A new modeling study, led by Radwan Tajeddine of Cornell University, shows several moons — Pan, Atlas, Prometheus, Pandora, Janus, Epimetheus, and Mimas — help to hold the rings together. His study was based on observations from Cassini, which examined waves in the rings and obtained the masses of Saturn's moons. This new data helped Tajeddine's team determine how the moons temper the rings' momentum outwards. His research will be published Oct. 18 in Astrophysical Journal.