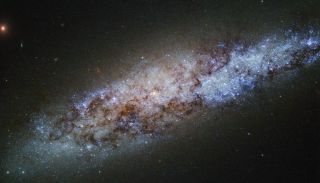 Astronomers and cosmologists have an inventory problem: They haven’t been able to account for a fair amount of the stuff that makes up our universe.

There are the longstanding challenges with pinpointing dark energy and dark matter, two invisible components that together make up more than 95 percent of the cosmos. But there is also the lesser-known problem of missing baryon particles.

Baryons are subatomic particles that include protons and neutrons, which form the nuclei of atoms. Baryonic matter — part of what we consider "normal matter" in the universe — makes up everything we are familiar with: stars, planets, the chair you are sitting on, the device you are using to read this, and you.

So there was understandable excitement this week when it emerged that two separate teams of researchers may have found this "missing" baryonic matter.

When astronomers observe the universe, they find just 10 percent of normal baryonic matter as easily observable matter in stars and nebulae, and another 40 percent has been found in diffuse clouds within galaxies.

It has been theorized that the remaining regular matter must exist as a diffuse gas between galaxies. And now the two new research papers indicate that baryonic matter does indeed exist in the form of filaments of gas between galaxies, making up the missing percentage.

RELATED: Astronomers Capture the First 'Image' of the Dark Matter That Holds the Universe Together

Hideki Tanimura is from the Institute of Space Astrophysics in Orsay, France, and led one of the teams.

Tanimura's team and another team led by Anna de Graaff at the University of Edinburgh in Scotland looked at data from the Planck satellite for a thermal signal called the Sunyaev-Zel'dovich effect. This effect allows for the detection of very faint objects, and looks for photons from the Cosmic Microwave Background as it travels through hot gas.

The interaction, which only the Planck satellite so far has been able to detect, allows astronomers to spot the presence of matter, even if it is very faint at high redshifts.

In 2015, Planck data was used to create a map of this effect throughout the observable universe. But because the filaments of gas between galaxies are so diffuse, it is very difficult to detect them directly on Planck's map without using points of reference.

RELATED: The Andromeda Galaxy Could Be Buzzing With Dark Matter

Both of the teams of researchers used data from the Sloan Digital Sky Survey to look at galaxies that were predicted to be connected by filaments of faint gas. They stacked the Planck data to look in the areas between the galaxies.

Tanimura said the results between the two groups are consistent within margins.

"The biggest surprise is that the gas we detected is very low-dense, lower than expected," Tanimura said. "It is very surprising and very important because we prove that we can detect it now! It means that we can now start to make an entire map of the universe, including filaments as well as galaxies."

Tanimura said that the total amount of baryons has been measured by other observations such as the CMB observations and Lyman Alpha observations, and their results are consistent within margins with cosmological simulations.

"There is already a consensus about it and we prove that it is true," he said. "But we know more than that. We estimate the distribution and physical states of the (missing) baryons. By comparing the result (which was unknown) with current models such as cosmological simulations, we can make [a] more precise picture of the current universe and constrain the evolution of the universe."

Tanimura noted that this finding is analogous to the first maps made of the world.

"When people went out to the ocean and started making a map of our world, it was not used by most of the people then, but we use the world map now to travel abroad," he said. "In the same way, the map of the entire universe may not be valuable now because we do not have a technology to go far out to the space. However, it could be valuable 500 years later."

He added, "We are in the first stage of making [a] 'map of the entire universe.'"