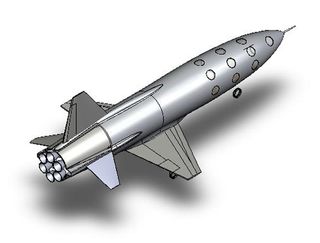 Dream Chaser's new suborbital design will be based on a melding of the NASA and Air Force X-2, X-15, and T-38 vehicles - rather than using the orbital NASA HL-20 lifting body craft. Image
(Image: © Benson Space Company)

The firm?s newsuborbital design will be based on a melding of the NASA and Air Force X-2,X-15, and T-38 vehicles - rather than using an earlier design - the orbitalNASA HL-20 lifting body craft. The new NASA/Air Force-derived design is ?saferand better,? Benson said. [see image]

This new design is deemedsafer and more aerodynamic, Benson said. It will also allow Benson SpaceCompany to remain on schedule to make its initial commercial spaceflights in2009.

The new Dream Chaserspaceship design is lighter and sleeker, Benson is reporting, resulting in lessdrag and requiring less propulsion than the earlier HL-20 design.

The vehicle is to bepowered by safe hybrid rocket motors, will launch vertically, followed by glideto a landing at the launch site.

A safer ?carefree reentry? --after achieving an altitude of at least 65 miles ? Benson reports, will subjectpassengers to minimal G-forces, compared to other designs. It will also havemany large, well-placed windows for ideal passenger views of the Earth andspace during the suborbital trek.

While thenew design is safer and more aerodynamic, Benson noted, it will also be easierand faster to construct, allowing BSC to remain on-schedule to make its initialcommercial spaceflights in 2009. The aim is to provide the first, safest andbest astronaut-making spaceflights for the emerging space tourism market, headded.

?During thepast two months a small, highly experienced team has taken a fresh look andconcluded that we can do better,? Benson noted in a press statement.

?To thatend, the new spaceship will incorporate the best elements selected from othersuccessful vehicles. This will result in a spaceship that provides a betterride and even more spectacular views, and at this early stage we will loselittle time in bringing it to the commercial market,? Benson explained.

NOTE: Theviews of this article are the author's and do not reflect the policies of the NationalSpace Society.