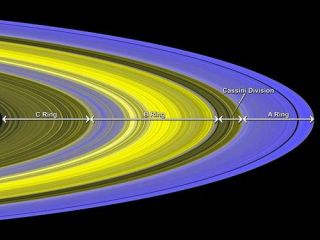 The newfound clumps in Saturn's B ring are 100 to 160 feet (30 to 50 meters) across. They are too small to be seen directly. However, scientists can map the distribution, shape and orientation of the clumps. Colors in this image indicate the orientation of clumps, and brightness indicates the density of ring particles. The formation of wakes is strongest in the bluer regions, where ring particles clump together in tilted wakes. Particles in the central yellow regions are too densely packed for any starlight to pass through.
(Image: © NASA/JPL/University of Colorado)

Saturn’s largest ring might appear solid when viewed from Earth, but closer inspection by NASA’s Cassini spacecraft reveals it is composed of tightly packed clumps of particles in constant collision with one another.

The research also suggests scientists have underestimated the total mass of Saturn’s rings, which might actually be two or more times as massive than previously thought.

“The rings are different from the picture we had in our minds,” said study leader Larry Esposito of the University of Colorado, Boulder. “If you were flying under Saturn’s rings in an airplane, you would see these flashes of sunlight come through the gaps, followed by dark and so forth.”

The findings, to be detailed in an upcoming issue of the journal Icarus, show Saturn’s B ring particles are not uniformly distributed as previously thought.

To measure the ring particles’ distribution, scientists directed Cassini to observe the brightness of a background star as the rings passed in front of it multiple times. Study team member Josh Colwell of the University of Central Florida, Orlando compares the technique to a medical CAT scan.

“By studying the brightness of stars as the rings pass in front of them, we are able to map the ring structures in 3-D and learn more about the shape, spacing and orientation of clusters of particles,” Colwell said.

This provided a measurement of the amount of ring material between the spacecraft and the star.

The observations confirmed that ring particles come together to form giant clumps called  “self-gravity wakes” that can reach 100 to 160 feet (30 to 50 meters) across.

If the clumps were farther from Saturn, they might amass to form a moon, scientists say. But because they are so close to Saturn, the clumps’ different speeds around the planet counteract the gravitational attraction they feel for each other and stretch them out like taffy.

Cassini also revealed the clumps in Saturn’s B ring are neatly organized and constantly colliding, which surprised scientists.

It was previously thought the ring particles crashed into one another about twice every hour.

Instead, “at any given time, most particles are going to be in one of the clumps,” Cowell said, “but the particles keep moving from clump to clump as clumps are destroyed and new ones are formed.”