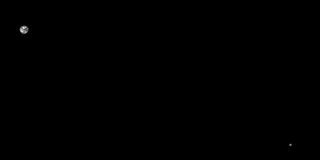 NASA's OSIRIS-REx spacecraft now has some nice photos of home to look at during its long flight to a distant asteroid.

OSIRIS-REx took a picture of the Earth-moon system on Monday (Sept. 25), a few days after performing a "gravity-assist" flyby of our planet that boosted its speed and helped set its course toward the 1,640-foot-wide (500 meters) asteroid Bennu.

The probe was 804,000 miles (1.297 million kilometers) from Earth and 735,000 miles (1.185 million km) from the moon when it captured the black-and-white image, NASA officials wrote in a description Thursday (Sept. 28). [OSIRIS-REx: NASA's Asteroid Sample-Return Mission in Pictures]

"The image has been rotated so that Earth's north pole is located at the top, and the Baja Peninsula is visible above and to the right of center," NASA officials wrote in an image description. "Cloud cover and the Pacific Ocean dominate most of the image, but Hurricane Maria and the remnants of Hurricane Jose can be seen in the far upper-right portion of the image, off the east coast of the United States."

OSIRIS-Rex took both of the newly released photos with its navigation camera. On Tuesday (Sept. 26), NASA released a color image of Earth that the spacecraft captured on flyby day using its MapCam camera.

If all goes according to plan, the spacecraft will rendezvous with Bennu in late 2018, then study the asteroid from orbit for more than 18 months. In July 2020, the probe will snag at least 2.1 ounces (60 grams) of material from the asteroid's surface; a return capsule containing this sample will come back to Earth, making a parachute-aided landing in the Utah desert in September 2023.

Scientists around the world will then study this asteroid material, analyzing it for clues about the solar system's early days and the role that dark, primitive asteroids such as Bennu may have played in seeding Earth with the carbon-containing building blocks of life.