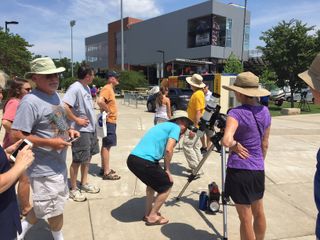 In Carbondale, Illinois, people look through a solar-viewing telescope in preparation for the total solar eclipse on Monday (Aug. 21).
(Image: © Denise Chow/LiveScience.com)

CARBONDALE, Ill. — When it comes to total solar eclipses, "X" marks the spot for this college town, and excitement is building as people gear up for what's being heralded as the "Great American Solar Eclipse."

For the first time since 1918, a total solar eclipse will sweep across the entire contiguous U.S. — from Oregon to South Carolina — and cities along a 70-mile-wide (113 kilometers) "path of totality" will witness the strange effect of seeing the skies go dark in the middle of the day. [Here's How to Watch the Great American Solar Eclipse Live]

For many people, today's event will be their first time witnessing a total solar eclipse.

"I've seen partial eclipses before, and that really left an impact — so I really wanted to experience a total [eclipse]," said Brian Pietrzak, who traveled to Carbondale with his wife and two young sons from Wheaton, Illinois.

Pietrzak was prepared: He and his wife started planning this trip several years ago. "We've got a family friend who basically chases eclipses, so we found out about it four or five years ago, so we were planning ahead," he told Live Science.

Carbondale has become a hub of eclipse activity because of its fortuitous placement along the eclipse's path of totality. The town will experience 2 minutes and 38 seconds of darkness during the height of the total eclipse — one of the longest phases of totality in the entire country. As such, local officials are expecting around 50,000 people to descend on the college town today.

Eric Claeys made the roughly 340-mile (550 kilometers) journey from Naperville, Illinois, to Carbondale with other members of the Naperville Astronomical Association. The club began planning for this trip a little more than two years ago, he told Live Science, and about 250 people made the pilgrimage to try to glimpse the rare celestial event.

"I've never seen a total solar eclipse," Claeys said. "I've seen partial, and the difference between total and partial is like night and day."

Depending on the weather, Claeys and his fellow club members will watch the eclipse from one of three locations: one in southern Illinois, one in Missouri or one in Tennessee.

And like Claeys, many visitors to Carbondale said witnessing today's skywatching event will fulfill a long-held wish to see a total solar eclipse in person.

"I've been interested in eclipses since I was a little kid," said Tyrus Eagle, who, together with Lillianna Blair, drove 8 hours from Ypsilanti, Michigan, to be in Carbondale. "I've never seen one and always wanted to see one."

The 25-year-old said he initially planned to drive to the closest spot where he could see totality but was convinced to make the journey to southern Illinois after hearing about the various educational and outreach events being held on the campus of Southern Illinois University.

"We get to see the eclipse and learn a bunch about it, which is really neat," Eagle told Live Science.

And even though America will fall under the path of another total solar eclipse in 2024, today's event feels to some like a once-in-a-lifetime opportunity.

"I didn't think there would be many chances for me to see another full total eclipse. So I thought, 'You know, just do it now,'" said Gary Roby, an assistant professor of chemistry at College of DuPage in Naperville, Illinois, about 5 hours north of Carbondale.

Roby is planning to take some photographs during the eclipse (including an attempt to snap a photo during totality with a telephoto lens), but he said he wants to simply experience the event first and foremost.

"I'm looking forward to seeing what happens and how people react," Roby said. "I just want to open up my senses and pay attention."

And for anyone who isn't able to make it to a viewing spot along the path of totality this time around, there will be another chance in seven years. And Carbondale will once more have a chance to shine: It is the only city that will be in the path of totality in both 2017 and 2024.

"Talk about luck," Roby said. "If this goes well, then in seven years, people will remember and go: I've got to get to Carbondale."