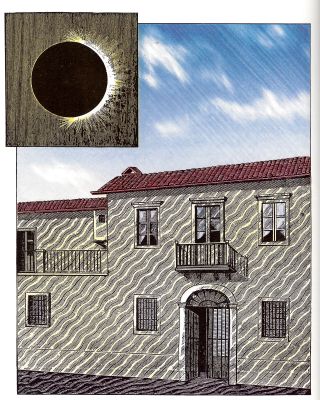 On Aug. 21, as most readers certainly know by now, the shadow of the moon will sweep down from space and slide across the surface of the Earth, bringing a total solar eclipse to parts of the contiguous United States for the first time in a generation. The highlight of totality for many will be the opportunity to view the incredible solar corona — the twisted outer atmosphere that reveals the presence of the sun's active magnetic field — as well as seeing stars and planets pop into view during the daytime. But there is another unusual phenomenon that is visible only when the sun has narrowed to just a filament of light: shadow bands.

Among the eerie phenomena that can accompany an eclipse of the sun, shadow bands are perhaps the most unusual. These mysterious gray ripples are sometimes seen flitting over the ground within several minutes of totality (the period when the sun's disk is fully concealed by the moon). Initially, the bands appear faint and jumbled; but as totality draws near, they become more organized, their spacing decreases to an inch or two and they become more visible. After totality ends, the pattern reverses: the bands reappear and become progressively fainter and more disorganized until they finally disappear. [How to View a Solar Eclipse Without Damaging Your Eyes]

And yet at a particular eclipse, observers at different locations along the eclipse path will see quite different shadow band effects, with people at some locations reporting almost unobservable bands while others seeing them quite distinctly. At some eclipses the bands are quite vivid and conspicuous, while at other eclipses they will be very faint or not visible at all.

Nobody can state with certainty as to when shadow bands were first noted. According to George F. Chambers in his book "The Story of Eclipses" (Appleton, 1902), the shadow-band phenomenon was reported at the eclipse of July 8, 1842. By 1878 in Colorado, observers were prepared for the appearance of the "diffraction bands." Possibly the reason for the paucity of shadow-band observations before the mid-19th century is that so many viewers were concentrating their gaze upward in those final exciting few minutes rather than looking down!

Shadow bands are also very difficult to photograph and the reason is obvious: The bands usually occur when only about 1 percent (or less) of the sun remains uncovered by the moon, so only a few tenths of a percent of normal sunlight is left, so the contrast is very low. The typical speed of the bands along the ground is about 10 feet per second, and as they are generally only an inch or two wide, they become blurred and washed out when attempts are made to photograph or video them.

There is also a physiological reason why shadow bands are unrecognized in most photographs. The bands are much easier to see when they are in motion than when stationary, as this simple experiment shows. Hold a pencil horizontally over a sheet of paper that is illuminated by an overhead light. Slowly raise the pencil until you can no longer discern its shadow. Now move the pencil from side to side — the shadow suddenly becomes visible again, with about as much contrast as a typical shadow band. The pencil must be raised much higher above the paper to make the moving shadow invisible.

What is their cause?

Over the last 175 years, a variety of proposals have been forwarded to try to explain what shadow bands are. One of the first explanations was that the bands are very high-order fringes of a single-slit diffraction pattern (hence the term "diffraction bands"). This pattern is created by waves of light passing through a thin slit in a solid surface, creating one dark stripe in the middle and subsequently lighter stripes to each side. Then in 1924, Guido Horn-D'Arturo suggested the bands were overlapping pinhole images of the sun formed by spriragli, or gaps in the Earth's upper atmosphere.

But the most probable explanation seems to be a meteorological effect produced by the last of the sun’s rays being distorted by Earth's turbulent atmosphere; this same effect disturbs the light from distant stars, causing them to appear to twinkle. A star’s light is disturbed because, for all intents and purposes, it is nothing more than a point source of light in our sky. On the other hand, bright naked-eye planets such as Venus and Jupiter are not point sources but subtend to a much larger size. Thus, they rarely, if ever, appear to twinkle even when very near to the horizon. Of course, the sun and moon do not twinkle at all.

However, during a solar eclipse, as the sun’s disk is reduced to a very narrow "filament" of light, each point along the filament should appear to twinkle like a star. Thus, shadow bands might be the net result of light coming from each shimmering point. Some believe that the worse the conditions are for telescopic viewing (because of atmospheric disturbances), the better the shadow bands. [First Time Seeing a Total Solar Eclipse? Check Out This Video from NASA]

In the 20th century, two "vintage" years stand out so far as shadow-band visibility is concerned. The first case is the eclipse of Jan. 24, 1925. Since this event came a few days after a heavy snowfall for the Northeast United States, shadow bands were readily seen upon the fresh snow by most eclipse watchers. Meteorologist Edward Brooks who observed this eclipse from Groton, Connecticut, noted in 1978: "The snow offered the ground offered the best backdrop for viewing the eerie fleeting shadow bands at any of the nine total eclipses I have gone to."

At the eclipse of March 7, 1970, which nearly paralleled the U.S. East Coast, many shadow-band sightings were recorded. To astronomer Glenn Schneider, watching from Greenville, North Carolina, the shadow bands resembled "jail bars."

Even outside the totality path, shadow bands can sometimes be observed. For instance, from Hyderabad, India, in 1980, where a partial eclipse covered more than 99 percent of the sun, a person who was among a group of eclipse watchers was heard to suddenly yell, "There’s fire on the ground!" But what he was witnessing was a sensational display of shadow bands. Not knowing at first what they were, they were described as "flames leaping 6 to 10 feet off the ground."

Interestingly, I have been to 11 total eclipses, yet my only view of shadow bands came during an annular eclipse (when a ring of the sun's disk remains visible around the moon). On May 30, 1984, from Greenville, South Carolina, for about 90 seconds before and after the annular phase I caught sight of very weak smoky bands that displayed little movement but appeared to shimmer, resembling sunlight passing over a radiator or ripples of sunshine at the bottom of a breeze-stirred pool.

To view shadow bands, many people will stretch a large white sheet on the ground. The best way to try to see them is to use a strongly backscattering surface, such as a glass-beaded projection screen that will improve image brightness, placed perpendicular to the rays of the sun. Start watching about 5 minutes before totality. As soon as you see the bands, note the time of appearance, and then the general direction in which they are moving by positioning a rod on the screen parallel to the direction of motion. Leave the rod in the position placed until after the end of totality, when the direction can be determined at leisure. You might want to have a second screen and rod prepared to observe the phenomenon just after totality (if it should appear). Estimate the width of the bands and the distance between the crest of the waves, how fast they are moving and whether they come singly or in groups.

It also seems that the most intense bands are seen in warm, dry areas and not from coastal areas or from shipboard. This would seem to suggest that for the upcoming eclipse you would be more likely to see shadow bands from Casper, Wyoming, or St. Joseph, Missouri, as opposed to Lincoln City, Oregon, or Charleston, South Carolina.

Good luck in planning your observations and carrying them out!

Joe Rao serves as an instructor and guest lecturer at New York's Hayden Planetarium. He writes about astronomy for Natural History magazine, the Farmers’ Almanac and other publications, and he is also an on-camera meteorologist for Fios1 News in Rye Brook, New York. Follow us @Spacedotcom, Facebook or Google+. Originally published on Space.com