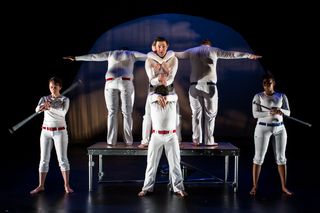 The seven members of Theater Unspeakable perform in an earlier version of their play, "Moonshot." To create a scene like this one, in which Neil Armstrong is piloting a plane, the actors tape off an area to represent a platform they'll use in the show. Once the blocking is determined, they introduce the actual platform into the performance.
(Image: © Theater Unspeakable)

NEW YORK — The new play "Moonshot" gives a sense of the demands placed on astronauts — and the actors portraying them — as part of a refreshing interpretation of the race to the moon.

Audiences gathered underneath the space shuttle Enterprise during the Space and Science Festival at the Intrepid Sea, Air & Space Museum on Aug. 4 to see the 50-minute performance of Theater Unspeakable's play. The curious momentum of 30-second scenes created a snapshot of the era, woven together by movement.

The play touched on many key players in the space race, but it highlighted one particularly iconic astronaut. "Eventually, [because] this is such an interesting story, we just had to pick one main through line to be the narrative, [and] it seemed like the family of Neil Armstrong eventually became the thing that the audiences were connecting to the most," said Marc Frost, the play's director during a Q&A after the show. [Destination Moon: The 350-Year History of Lunar Exploration (Infographic)]

The ensemble physically highlighted the awe of the space race and Neil Armstrong's role in it with creative lifts, motions and postures. The actors synchronized extending and bending arms to mime flight, and swayed them for parachutes. Actress Sonja Mata's head popped up behind the bent backs of the other six performers to represent the Sputnik satellite orbiting the curved Earth. In another vignette, six actors formed a circle and softly hummed, and the seventh actor leaned out over the edge of the small stage platform while connecting with the others using just one hand, seemingly floating to embody a spacewalk. The seven actors also took on the sounds of the 1960s, as actresses spoke in John F. Kennedy and Walter Cronkite impressions, and provided a humorous rendition of "Moon River."

The play regularly linked back to Armstrong's family life, and highlighted the emotional aspects of space travel for most of its characters. One of the most memorable scenes was when the actors playing Armstrong and his wife mimed undressing in a home bathroom mirror, and Neil shared to his wife, "I'm afraid, too."

The narrative did jump back and forth to cover several, and perhaps too many, aspects of the space race to follow. The scenes depicting women training for space, particularly the moment highlighting the first centrifugal experiments with Geraldyn (Jerrie) Cobb, but actress Sarah Liken shifted the tone from sad to humorous with her swift entrance as a bold and sassy version of Valentina Tereshkova, the first woman to fly in space.

In a way, the play is emblematic of the upcoming Aug. 21 total solar eclipse. Just as the eclipse is a brief, "transient" experience, a large draw of theater is its immediacy and the uniqueness of each performance. According to the Q&A segment, one reason the ensemble was enthusiastic about acting in "Moonshot" was that each production is different.

"We had done it a few times in Chicago for different audiences — seeing what works and what doesn't," said actor Orion Lay-Sleeper. "Well, there are about six different versions of this show."

Another highlight of the Q&A was when an audience member asked Mata, who wore pigtails while playing Sputnik, if she should have worn four braids instead of two (to reflect Sputnik's four antennae). "We had this conversation before call time!" Mata replied.

You can see "Moonshot" by Chicago's Theater Unspeakable in February 2018 at Lincoln Center (New York) and at Mesa Arts Center (Arizona).

Correction: This story was updated on Aug. 10 to correct the name of the space shuttle on display at the Intrepid museum. It is the Enterprise shuttle, not Endeavour.