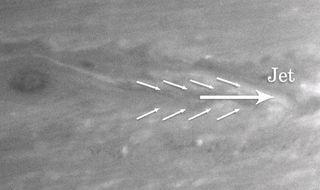 The Cassini spacecraft circling Saturn has returned images of immense rotating storms that appear to be the powerhouse behind the ringed planet's jet streams.

Saturn's giant rotating storms -- or eddies -- feed into the planet's swift jet streams, much like rotating gears can power a conveyor belt, by pumping them with energetic winds, Saturn researchers announced Tuesday.

"The new information about how Saturn's jet streams are powered is exactly the opposite of what we thought prior to Cassini," said the study's leader Anthony Del Genio, a Cassini imaging scientist at NASA's Goddard Institute for Space Studies in New York City.

Jet streams are regions in which the motions of a planet's atmosphere swiftly blow winds east or west. On Saturn, jet streams can blow 10 times faster than they do on Earth and reach speeds of up to 1,000 miles (1,609 kilometers) per hour, NASA researchers have said.

Researchers had previously thought Saturn's eddies would siphon energy from the planet's jet streams, not amplify them, due to atmospheric friction and tugging between storms.

"We knew the eddies were powering the jets because they were pointing in the same direction and carrying the same momentum in that direction," said Andrew Ingersoll, a Cassini imaging team member at the California Institute of Technology in Pasadena, California.

Similar interactions between swirling storm eddies and jet streams have been seen on Earth and, more recently, in the cloud banks of Jupiter, but the new Cassini findings are a first for Saturn. On Earth, a pair of well-known jet streams circle the planet in the northern and southern hemisphere.

Scientists used Cassini's observations to track cloud movements during successive images taken about 10 hours apart, or about one Saturn rotation, to link the planet's storm eddies and jet streams. The research is detailed in the solar system-focused science journal Icarus.

Additional images of Saturn's southern hemisphere suggest the process occurs on a planet-wide scale and explains why the ringed world's alternating bands of eastward and westward jet streams have remained constant despite decades of observations, researchers said.