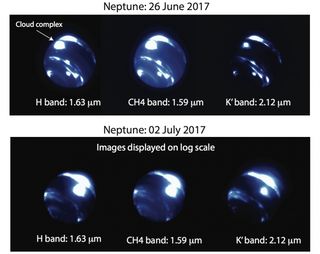 A nearly Earth-size storm system was spotted near Neptune's equator, surprising scientists because no bright clouds have ever been seen in that location.

The storm is about 6,000 miles (9,000 kilometers) in length — about three-quarters Earth's diameter — and is even huge compared to the size of Neptune: it spans nearly 30 degrees in both longitude and latitude. When astronomers studied the storm between June 26 and July 2, it appeared to get brighter.

"Seeing a storm this bright at such a low latitude is extremely surprising," Ned Molter, a graduate student at the University of California, Berkeley, said in a statement. He saw the storm while doing a test run at the W. M. Keck Observatory at Mauna Kea, Hawaii. [Inside Gas Giant Neptune]

"Normally, this area is really quiet and we only see bright clouds in the mid-latitude bands, so to have such an enormous cloud sitting right at the equator is spectacular," he added.

Because telescope time is competitive, opportunities to observe the gas giant planets are rare. This means that professional astronomers may have to wait months or years in between observations. Amateurs, however, can supplement some of the observations as telescope and imaging technology improves. (There was an amateur campaign to observe Neptune in 2015, with results recently published in the journal Icarus.)

Neptune storms have been captured by other professional observatories in the past. Voyager 2 saw a Great Dark Spot in 1989, which vanished by the time the Hubble Space Telescope examined the planet in 1994.

Hubble found a different storm at that time as well, which Molter and his adviser, Imke de Pater (also of UC Berkeley), thought they might have rediscovered in the Keck view — but measurements of the two storms didn't match up.

The researchers wondered how the new storm was able to stay together across so many latitudes. Neptune — the windiest planet in the solar system — has different winds at different latitudes, so the astronomers suggested the entire storm is anchored by a massive vortex.

Inside a vortex, gases cool as they rise. When the gas temperature drops below its condensation temperature (or the point where it turns to a liquid), the gas condenses out and creates clouds. Although this same process takes place on Earth, the clouds on Neptune are likely made of a different substance — methane, according to the statement.

"This shows that there are extremely drastic changes in the dynamics of Neptune's atmosphere, and perhaps this is a seasonal weather event that may happen every few decades or so," de Pater said.

Molter and de Pater will attempt to get more observing time at Keck in the fall to learn more about the storm, and how it is evolving, the researchers said. Their research will not only give insights into Neptune's atmosphere, but also how exoplanet atmospheres might behave, the researchers said. Most exoplanets found so far are about Neptune's size, but telescope technology today doesn't allow much insight into their atmospheres because the exoplanets are so small and far away.