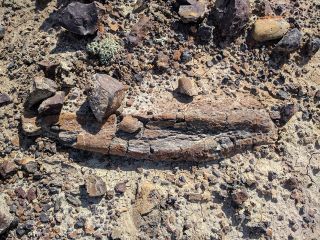 Bones recently found in Alberta, Canada, are thought to belong to a hadrosaur — a duck-billed dinosaur.
(Image: © Adam McInnes)

What began as a search by university students for a Mars-like landscape in a Canadian park took an unexpected detour into paleontology, when they discovered strange "rocks" that turned out to be dinosaur bones.

Members of the University of Saskatchewan Space Design Team (USST) were visiting Midland Provincial Park in Alberta, Canada, on June 1, to scout locations for an upcoming robotics contest. They needed terrain that closely mimicked the Martian surface, to test prototypes of Mars rovers in a new competition bringing together teams from around North America, USST President Danno Peters, a student studying engineering physics at the University of Saskatchewan, told Live Science in an email.

But the team found something else along the way: unusual-looking rocks embedded in the ground. Upon closer inspection, the "rocks" turned out to be fossils, including what appeared to be a thigh bone and part of a jaw, Peters said. [7 Most Mars-Like Places on Earth]

Dry conditions in rocky deserts make many of them good candidates for finding fossils; some of the richest fossil repositories in the world are located in deserts, with the largest number of fossils originating in the badlands and deserts of China, Argentina and North America.

"We initially noticed a rock that looked surprisingly like a thigh bone protruding from the ground. It was encased in rock which was lighter than the surrounding stones," Peters told Live Science.

Conservation officials from the Alberta Parks Department and paleontologists from Alberta's Royal Tyrrell Museum who were with the students at the time of the discovery confirmed that the finds were fossils, and conducted a detailed inspection of the immediate area to see if they could find more. The bones have not yet been excavated, which makes it difficult to establish their identity with certainty. But experts suspect that they belong to a hadrosaurid, a type of duck-billed dinosaur, Peters said.

Once the area around the fossils was secured, the competition was allowed to proceed using part of the site nearby. The rovers that rolled out were much smaller than those currently exploring Mars and were designed for scenarios in which they could assist humans living on an extraterrestrial world someday, the Saskatoon StarPhoenix reported.

Competitions like this showcase how student engineers and designers explore the challenges of building complex scientific tools. The annual University Rover Challenge (URC) in the United States brings together rover-building teams from universities across the U.S. to demonstrate rover designs that could one day operate on Mars alongside astronauts, according to the URC website. And the European Rover Challenge, open to students from around the world, also tasks competitors with putting their rovers through a series of tests in a simulated Martian environment.

University students, and even high schoolers, have also demonstrated their innovative design prowess by building an underwater camera-toting "rover" to explore the Southern Ocean near Antarctica; technology capable of mining the lunar surface for materials to make rocket fuel; and a remote-controlled diving robot that can perform rescue missions to damaged submarines.

While fossil finding certainly generates excitement, the USST team won't be swapping robotics for paleontology anytime soon. Plans are already underway to expand the Mars rover competition in 2018, opening it to even more designs engineered by teams worldwide and finding more challenging terrain "to push the limits of the rovers and their designers," Peters said.