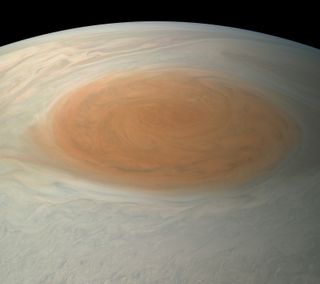 If you'd been riding aboard NASA's Juno probe when it zoomed over Jupiter's famous Great Red Spot earlier this month, this is what you would have seen.

A newly released photo gives a dramatic look at that July 10 close pass, capturing Juno's view of the enormous storm from an altitude of just 8,648 miles (13,918 kilometers).

"This true-color image offers a natural-color rendition of what the Great Red Spot and surrounding areas would look like to human eyes from Juno's position," NASA officials wrote in an image description Thursday (July 27). "The tumultuous atmospheric zones in and around the Great Red Spot are clearly visible."

The image was created by citizen scientist Björn Jónsson using data collected by Juno's JunoCam imager. NASA encourages anyone who wishes to process JunoCam raw images to do so; go to www.missionjuno.swri.edu/junocam for more information.

The $1.1 billion Juno mission launched in August 2011 and arrived in orbit around Jupiter on July 4, 2016. The probe is zooming around the huge planet on a highly elliptical path, making close approaches, or "perijoves," once every 53.5 days.

Juno is investigating Jupiter's composition and interior structure, with the aim of helping scientists better understand the gas giant's formation and evolution. The probe collects most of its data during perijove passes like the July 10 event, seven of which it has completed so far (not counting the initial one on July 4 of last year, when Juno's science gear was turned off).

Juno's mission is scheduled to last until at least February 2018.

The Great Red Spot has been raging for centuries. The huge storm is about 10,000 miles (16,000 km) wide, meaning it's bigger than the entire Earth. However, it used to be even bigger; the Great Red Spot has long been shrinking, for reasons that scientists don't entirely understand.