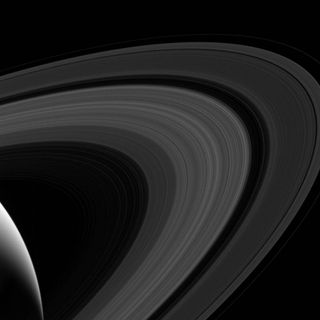 This image of Saturn’s rings was taken by NASA’s Cassini spacecraft on April 10, 2017, when the probe was about 680,000 miles (1.1 million kilometers) from the gas giant.
(Image: © NASA/JPL-Caltech/Space Science Institute)

"Although the rings lack the many colors of the rainbow, they arc across the sky of Saturn," NASA officials wrote in a photo description today (July 25). "From equatorial locations on the planet, they'd appear very thin since they would be seen edge-on. Closer to the poles, the rings would appear much wider; in some locations (for parts of Saturn's year), they would even block the sun for part of each day."

Though NASA released the image today, Cassini actually captured it on April 10, when the probe was about 680,000 miles (1.1 million kilometers) from Saturn's cloud tops, NASA officials said. Each pixel is about 43 miles (69 km) wide, they added. [See more amazing photos of Saturn's rings]

The $3.2 billion Cassini-Huygens mission — a joint effort of NASA, the European Space Agency and the Italian Space Agency — launched in October 1997 and arrived in Saturn orbit in July 2004.

The Cassini mothership carried a lander called Huygens, which landed on Saturn's largest moon, Titan, in January 2005. Huygens ceased operating about 90 minutes after its touchdown, but Cassini kept right on studying Saturn, its iconic rings and many moons.

But that work will soon come to an end. Cassini is currently embarked on the Grand Finale phase of its long, accomplished mission — a series of 22 dives between Saturn and the planet's innermost ring that will conclude with a suicide plunge on Sept. 15.

Mission controllers are steering Cassini into the gas giant on purpose, in an attempt to prevent the probe from contaminating Titan or fellow Saturn moon Enceladus — both of which may be capable of supporting life — with microbes from Earth.