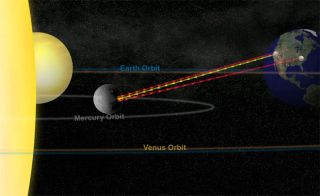 Artistic rendering of the observational geometry. A radar signal (yellow) is transmitted from the Goldstone antenna in California. Radar echoes (red) are received at the Goldstone antenna and at the Robert C. Byrd telescope in Green Bank, West Virginia.
(Image: © Bill Saxton, NRAO/AUI/NSF)

Kitchen physics dictates that a raw egg will spin slower than a hard-boiled one. Scientists using this same logic have discovered the planet Mercury has a fluid core of molten iron.

The finding, detailed in the May 4 issue of the journal Science, solves a 30-year-old mystery but raises another.

To figure out whether Mercury's core was liquid or solid, a team of scientists led by Jean-Luc Margot at Cornell University measured small twists in the planet's rotation. They used a new technique that involved bouncing a radio signal sent from a ground telescope in California off the planet and then catching it again in West Virginia.

After 5 years and 21 such observations, the team realized their values were twice as large as what would be expected if Mercury's core was solid.

"The variations in Mercury's spin rate that we measured are best explained by a core that is at least partially molten," Margot said. "We have a 95 percent confidence level in this conclusion."

Mercury, named after the Roman gods' fleet-footed messenger, is the closest planet to our Sun. One year there is equal to 88 Earth-days. Mercury is thought to consist of a thin silicate mantle encasing an iron core. Because it is so small-its mass is only 5 percent of Earth's-scientists thought it cooled rapidly early in its formation, essentially freezing any liquid core it had into a solid.

But 30 years ago, a flyby of the planet by the Mariner 10 spacecraft detected a weak magnetic field, about 1 percent as strong as Earth's, within the planet.  Magnetic fields are generally associated with a dynamic molten core.

Margot and his team speculate that sulfur or some other light element got mixed with Mercury's iron core when the planet was forming and lowered its melting temperature.

"If you had such a lighter element polluting the iron, it could explain why the core has remained fluid up to the present time," Margot told SPACE.com.

"The surprise," Margot added, "is that you don't expect sulfur to condense out at the distance of Mercury from the Sun."

That unexpected result fails to jibe with standard planet formation theory. That theory asserts that planets form out of the swirling disks of gas and dust that swaddle newborn stars. Within this "protoplanetary" disk, elements condense and solidify out at different distances from the star depending on their densities.

Heavy elements with high melting points, such as iron, nickel and silicon, condensed into solids closer to the star. Out of these solids, planet embryos form. These "planetesimals" sometimes become full-fledged planets. This is why the inner planets in our solar system-Mercury, Venus, Earth and Mars-are formed mostly of these heavy elements. Lighter elements such as sulfur can only solidify farther out from the star, where it is cooler.

The new findings suggests there was some "radial mixing" happening early in the solar system's history, with lighter elements at the fringes of the solar system being transported inward, possibly by planetesimals interacting gravitationally with each other.

"Since you don't expect sulfur to condense in solid form there when [Mercury] formed, it must have been brought in from farther out in the solar system," Margot said.

The mysteries still surrounding Mercury's core might be solved when NASA's Messenger spacecraft makes its first flyby of the planet in 2008.

"It is our hope that Messenger will address the remaining questions that we cannot address from the ground," Margot said.

The researchers made their measurements using the NASA Jet Propulsion Laboratory 70-meter antenna at Goldstone, California, and the Green Bank Telescope in West Virginia. They also sent signals from Arecibo Observatory in Puerto Rico and received them back at Goldstone.