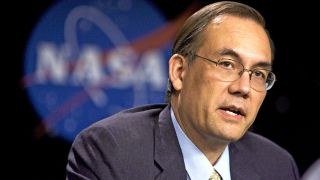 Pace has been appointed the NSC's executive secretary, and not just because his first initial and last name flow together so well. Pace heads the Space Policy Institute at George Washington University, and he's Professor of the Practice of International Affairs at the school as well. He has also worked at NASA and the White House Office of Science and Technology Policy.

Trump officially resurrected the NSC late last month, saying that the body will help steer and streamline American space policy. The council — which was last active in the early 1990s, during the presidency of George H.W. Bush — will be chaired by Vice President Mike Pence and consist of a number of high-ranking officials, including the head of NASA, the chairman of the Joint Chiefs of Staff and the secretaries of state, defense, commerce and transportation, among others.

According to the executive order that revived it, the NSC will also have a staff headed by a civilian executive secretary. That person (Pace) "will run the council on a day-to-day basis," according to Space News.

"Scott has devoted his career to space policy, and will bring a wealth of experience and knowledge to this role," former NASA astronaut Sandy Magnus, executive director of the American Institute of Aeronautics and Astronautics, said in a statement. "We look forward to working with him, Council members and the Vice President’s office as we strive to maintain our nation’s leadership in the civil, commercial and national security space sectors."