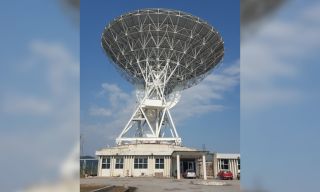 The milestone makes Ghana the first partner country of the African Very Long Baseline Interferometry (VLBI) network to complete an antenna-to-radio telescope conversion, which signifies an important new step in African astronomy, said a July 4 announcement by the ministries of Ghana and South Africa.

"The Ghanaian government warmly embraces the prospect of radio astronomy in the country," said Kwabena Frimpong-Boateng, Ghana minister of environment, science, technology, and innovation, in the July 4 announcement.

The antenna is a new addition to the VLBI global family, which includes radio-based antennas that merge their observations to create a telescope with a diameter equivalent of two-and-half-times the diameter of Earth. This large system includes radio antennas on different continents as well as some in orbit.

The antenna will become part of the African VLBI Network (AVN), and in the future, it will become incorporated into the next phase of construction of a new project called the Square Kilometer Array (SKA). SKA Africa, a subsidiary of SKA, and its partners see the Ghana antenna transformation as an important first step in developing new radio telescopes across the African continent, according to the statement. Included among SKA Africa's new construction projects is the 64-antenna South African MeerKAT radio telescope.

However, the big takeaway from the first-light observations is that you don't have to build, but rather, recycle.

According to the African-European Radio Astronomy Platform (AERAP), many redundant and obsolete telecommunications dishes lie dormant across the African continent. AERAP officials said this surplus is due to the "construction of terrestrial and marine optical-fiber networks throughout Africa" that supplanted the radio dishes. AERAP officials added that "telecom operators in two [African] countries have already indicated that they are open to handing over the dishes."

Bringing new life to otherwise-unused antenna structures, and building new satellite arrays, makes it possible to link together the signals the instruments produce, and then the African VLBI Network can really take off, researchers said. The larger the network of participating satellite dishes is, the more precise astronomical findings can be.