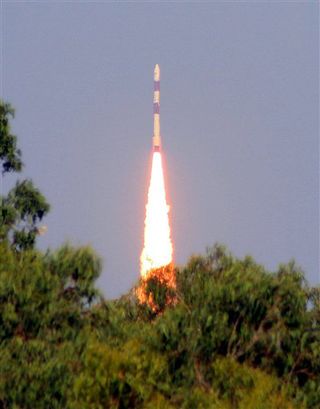 An Italian gamma rayobservatory hitched a ride to space aboard an Indian rocket today, beginning athree-year mission to survey the sky in a search for faraway sources of theUniverse's most energetic form of light.

The 776-pound craftseparated from the four-stage PSLV booster about 23 minutes after launch. Therocket was targeting an orbit approximately 342 miles high with an inclinationof 2.5 degrees, according to Indian officials.

An avionics package washoused inside a dual-payload adapter to test advanced computer, navigation andtelemetry systems, but the equipment remained attached to the rocket's fourthstage.

The rocket flew without thesix standard solid rocket boosters attached around the base of the launcher - afirst for the PSLV. Today's launch was the 11th flight of the PSLV since its1993 debut.

The mission was the firstcommercial launch conducted by India's space program. Earlier PSLV missionslaunched small foreign spacecraft, but today was the first time a payingcustomer's satellite filled the role of a primary payload.

Paid for by the ItalianSpace Agency, AGILE's array of scientific instruments will detect high-energyemissions from the most far-flung regions of the Universe.

AGILE carries a gamma rayimager, an X-ray detector, and a device called a mini-calorimeter to hunt for transientevents such as gamma ray bursts, the most powerful explosions in the Universe.

The combination of gammaray and X-ray detectors will give scientists a unique tool to performsynchronized observations in both energy bands.

The science package willprovide data continuity to build upon discoveries made by NASA's ComptonGamma Ray Observatory. Part of the U.S. space agency's Great Observatoriesprogram, the satellite was deliberately crashed into Earth's atmosphere in 2000due to fears of an uncontrolled reentry.

AGILE covers an energybandwidth not observed since the end of Compton's mission. Other recent gammaray telescopes have mostly focused on lower energy bands, according to theAGILE science team.

The instrument will observeboth fleeting gamma ray emissions such as gamma ray bursts and solar flares,and steady sources like galactic nuclei and pulsars, the rapidly spinningcollapsed remnants of dead stars

The spacecraft can quicklydetect and respond to sudden events like gamma ray bursts. AGILE's science teamwill immediately send information on such events to both ground- andspace-based telescopes for complementary observations. Scientists expect atleast one gamma ray burst per month will be detected by AGILE.

The bursts, which usuallylast just several minutes, are mysterious explosions scattered throughout theUniverse. AGILE will be able to send alerts with burst coordinates to otherobservatories within seconds of the initial event, according to the mission'sscience team.

AGILE will send the alertsback to Earth through the ORBCOMM communications satellite constellation whenthe satellite is not linked to a ground station.

The AGILE instrument cansurvey up to one-quarter of the sky at a time, which surpasses the field ofview of any previous gamma ray research mission.

The wide field of view willgive scientists a better opportunity to simultaneously look for unidentifiedgamma ray bursts and observe multiple known targets such as supernova remnantsand objects near the center of the Milky Way galaxy.

EGRET, which weighed morethan 4,000 pounds on the ground, was much larger than the entire sciencepayload aboard AGILE. The craft's instrument weighs less than 300 pounds onEarth.

AGILE will be pressed intoservice late this summer after a few months of tests.