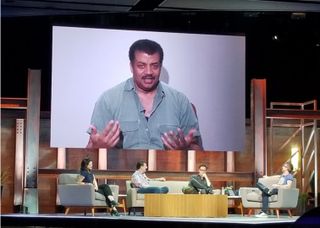 But balancing science and storytelling is not as easy as it may sound, as he and a distinguished panel realized during a fascinating discussion.

I attended the "World Builders" panel at E3 2017, which included Chris Hardwick (comedian and voice actor), James Gunn (director of the Guardians of the Galaxy films), Randy Pitchford (creator of Borderlands) and Kiki Wolfkill (executive producer for the Halo series) in addition to Dr. Tyson. The five guests had a fascinating discussion that began with game development, but ranged from astrophysics to story development in long-running TV series.

Space Odyssey is currently on Kickstarter, and aiming for a lofty goal of $314,159. Rather than a far-flung space opera, Space Odyssey will focus on the real-life laws of physics, and challenge players to work within their constraints to explore space and develop new technologies. Along the way, Tyson hopes they'll learn a thing or two about how the universe really works.

"I have no patience for people who say, 'I don't want the laws of physics to constrain me,'" Tyson said. Following the laws of physics in sci-fi narratives, he explained, could actually help tell better stories. In particular, he cited Star Wars: Episode VII: The Force Awakens, where a superweapon drained an entire star in order to destroy a single planet. If such a weapon really existed, he explained, it could destroy thousands of planets – not just one. That sounds like a much bigger and more exciting intergalactic threat.

Of course, the panelists had a variety of different opinions on what makes good sci-fi. Not all of them thought that a strict adherence to the laws of physics was necessary. Wolfkill discussed the difference between creating a set of rules for a setting, and developing the canon of a setting's storyline.

"There's rules and then there's canon, and they're a little different," she said. "Canon provides an understanding of the universe. There can be good reasons to break canon." In particular, she cited the case of Cortana in the Halo games, and how the developers have played with her character to keep her involved in the storyline without explicitly going against the in-universe rule of AIs having a seven-year lifespan.

"People become proprietary," said Gunn, citing fans of his Guardians of the Galaxy films. Everyone who falls in love with a franchise has an idea of how the story should progress, he said. But when the story doesn't progress according to their preconceived desires, they can react in a hostile way.

Perhaps Pitchford put it best. When asked about what goes into making a good movie – or in his case, a good game – he gave a philosophical answer: "Quality is relative to the expectation of the audience," he said. A project can only be as good – or as bad – as the audience allows it to be. And unfortunately, making good movies and games gives the audience heightened expectations for the next installment in a series.

All of this led back to Dr. Tyson's take on popular media, whereupon Pitchford challenged him to name a movie that lived up to his lofty standards of scientific accuracy.

"The Matrix," Tyson replied – except for the fact that the robots used humans as a power source, even though that would be incredibly inefficient in real life. Even the best movies, it seems, have to sacrifice some scientific accuracy for the sake of a good story.