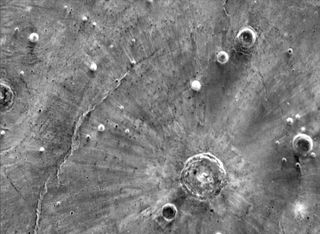 In an infrared image of Mars, strange bright streaks extend from the planet's Santa Fe crater. New research suggests that the streaks came from sideways, tornado-like vortices from the impact that generated the crater.
(Image: © NASA/JPL-Caltech/University of Arizona)

Ancient cosmic impacts on Mars might have created powerful wind vortices similar to sideways tornadoes, and the whirling winds would have rolled across the Red Planet's surface like barrels, a new study finds.

The streaks that those winds left behind could help reveal details about Mars' past, the researchers said.

The new study's lead author, Peter Schultz, an impact specialist at Brown University in Providence, Rhode Island, discovered hints of the odd vortices while conducting a routine "tour of Mars." During his downtime, Schultz analyzes NASA images to see if he might notice something interesting. [Photos: Most Powerful Storms of the Solar System]

"I know Mars pretty well — have studied it since the 1960s — and I enjoy looking at the new data that comes in," Schultz told Space.com.

The images revealed sets of bright streaks emanating from a few big impact craters on Mars more than 9.3 miles (15 kilometers) in diameter. This infrared brightness was likely due to exposed blocky rock surfaces, "which retain more heat than surfaces covered by powder," Schultz said in a statement. "That tells us that something came along and scoured those surfaces bare."

These streaks can extend quite far from the impacts that created them. For instance, on the 12.4-mile-wide (20 km) Santa Fe crater in the flat lowland region in Mars' northern hemisphere known as Chryse Planitia, the streaks can extend more than 72 miles (120 km) away from the point of impact, the new study found.

At times, debris kicked up by the impacts that created these streaks appears to have fallen on top of the streaks themselves, Schultz said. This finding suggests that the streaks were produced before the debris landed and that they were created very rapidly after the impacts, likely by winds, he added.

"These have tornado-like speeds but do not go straight up," Schultz said. "Instead, they are horizontal, like a tornado on Earth turned on its side."

When an asteroid, comet or other body strikes a planet at high speed, tons of material from both the impactor and the surface it hits gets vaporized instantly, he noted.

"This vapor travels outward at very high speeds from the impact point and interacts with the atmosphere to create very strong vortices," Schultz said. "These winds can exceed 600 mph [965 km/h]."

The researchers said these vortices might result when the intense flow of air from an impact encounters the rims of craters from previous impacts. The vortices form on both sides of the crater rims and roll downward, scouring the surface.

In the future, these streaks could help scientists learn details about ;the history of Mars, such as rates of erosion and the deposition rates of dust, "or even figure out how polar caps have advanced over time," Schultz said. "We can use these streaks as tools to say something about past conditions on Mars," he added.

Future research needs to investigate how these vortices get so big, and when they are or are not generated, Schultz said. For instance, factors such as the speed of the impactor or the amount of icy material in the object or below the surface that was impacted could play a role.

"We want to see why not every fresh crater on Mars exhibits these wind streaks — if there's something unusual about these streaks," Schultz said.

The scientists will detail their findings in the August issue of the journal Icarus.