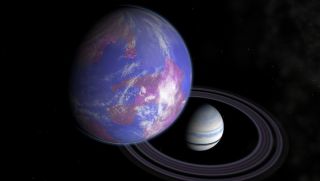 Artist's impression of a hypothetical exomoon going around an imagined planet. Exomoons have not been discovered yet, but we know of thousands of exoplanet candidates.
(Image: © NASA)

While we know of thousands of exoplanets and exoplanet candidates, the search for moons outside of our solar system is just beginning. We don't have a confirmed exomoon discovery yet, but they're bound to be out there.

Finding exomoons will help us better understand habitability on Earth. Some experts say a reason that life arose is our own moon is so close to the size of our planet, which stabilized its axis rotation. However, other studies (such as this 2011 American Astronomical Society paper quoted in a NASA Astrobiology story) argue that the gravitational influence of other planets in our solar system provide enough stability.

A new study looks at the possibilities of large moons in TRAPPIST-1, a notoriously crowded exoplanet system that may have habitable planets within it. Earlier this year, observations from NASA's Spitzer Space Telescope indicated that seven planets here could be rocky and have liquid water on their surfaces, making TRAPPIST-1 the system with the most potentially habitable planets.

But even before NASA's discovery, TRAPPIST-1 was known and pondered by scientists, including the author of the new paper, Stephen Kane, an associate professor of astronomy at San Francisco State University who specializes in exoplanets.

"I have several publications now on exomoons, and for many years I've been thinking about how the ability of a planet to host a moon scales with the presence of nearby planets and proximity to the host star," Kane said in an e-mail. "The discovery of the TRAPPIST-1 system prompted me to finally calculate whether or not planets in compact planetary systems can actually harbor moons."

Kane cautioned that scientists can't overly attribute Earth's habitability to our moon, because Earth is the only known habitable planet. However, the moon does have an important role: It creates significant tides on Earth, which probably helped create the tidal pools in which early biochemistry could occur.

"The presence of the moon has helped to stabilize changes in the tilt of the Earth's rotational axis, which in turn creates longer periods of climate stability," Kane added. "So although it's difficult to say what the Earth would be like without a moon, we can certainly describe ways in which it has positively influenced our present environment."

For TRAPPIST-1, Kane found that the planets are so tightly packed together that large moons would likely be impossible. While the rotational axes of the planets would quickly change and have more chaotic climates, he said, life could still evolve — it just might take a longer time.

Kane's methodology involved studying the influences of two parameters: the Hill radius, or the area in space in which a planet exerts gravitational influence based on its mass and distance from the host star, and the Roche limit, which identifies where the gravitational effect near a planet is too strong for a moon to survive.

"A moon can only exist around a planet if it lies between these two boundaries: too close and it will be destroyed, too far away and it will escape the gravitational influence of the planet," Kane said. "The results of the study described in my paper show that, for most planets in compact planetary systems, the Hill radius and Roche limit are close enough to each other that there is no space in which a moon can exist and so such planets cannot have moons in orbit around them."