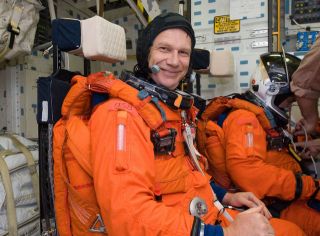 "It was better than a reality show, because it was reality," the climate scientist and retired astronaut Piers Sellers told me as he recalled his coming of age during the Space Race. This was the era of the first satellites, exploratory probes, and advances in spaceflight that culminated in the Apollo 11 moon landing, giving a sense of the present hurtling toward the future.

"It all fascinated me," he said, "and because of it I became a scientist. I'm not kidding. That was the thing which made me become a scientist."

But Piers Sellers didn't just become a scientist whose work became crucial to the development of climate studies. In his career's second stage, he became an astronaut who spent a total of 839 hours in space, helped to build the International Space Station, and completed six spacewalks, which not only gave him leadership and stature among his peers as an extravehicular activity specialist, but also a unique perspective on the vulnerability of our planet. After retiring as an astronaut, he worked as deputy director of NASA's Goddard Space Flight Center, pioneering research that would change the paradigm of how to use satellite data from space and apply it more readily to life on Earth.

"Purely on science alone, Piers was an icon — a force of nature defending our fragile Earth," said his former colleague Colleen Hartman, director of the Sciences and Exploration Directorate at Goddard. British-born and a naturalized American citizen, such was the stature of Sellers's work that none other than Neil Armstrong himself endorsed him for an Order of the British Empire (OBE).

Earlier this month, Sellers posthumously received the Space Foundation's General James E. Hill Lifetime Space Achievement Award, for which I had the honor of nominating him.

"I never met a single man, woman, or child who didn't instantly fall in love with Piers," Hartman said as she accepted the award on his behalf. "It is our American exceptionalism which demands that we make sure the Earth Piers defended remains a great place to live for the entire world."

Before passing away in December from pancreatic cancer at the age of just 61, Sellers used the final year of his life to work as hard as possible on efforts to save the planet from the effects of human-induced climate change.

"Very quickly, I found out that I had no desire to jostle with wealthy tourists on Mount Everest, or fight for some yardage on a beautiful and exclusive beach, or all those other things one toys with on a boring January afternoon," he wrote of his diagnosis in a New York Times op-ed. "Instead, I concluded that all I really wanted to do was spend more time with the people I know and love, and get back to my office as quickly as possible."

"Piers's work was vitally important," said friend and former NASA astronaut Ron Garan. "He knew it. So important that he dedicated the rest of his life to it. Literally."

His last days included a moving appearance in Before the Flood, the climate change documentary produced by Leonardo DiCaprio and Martin Scorsese. But in the face of distressing projections, he somehow never failed to remain unflappably optimistic.

RELATED: Coastal Cities Could Flood Three Times a Week by 2045

"Us humans right now are in a bit of a fix, with the damage we've done to the climate system, and it's a serious threat that we're facing. And if we don't take some kind of action over the next few years, things could get very unpleasant," he remarked in a video in which he discussed an insight from one of his spacewalks. "However, human creativity that got us into this mess, I'm pretty sure, could get us out of it. And when I looked down to the cities, I thought of all those millions of people interacting with each other, coming up with great ideas. And I'm sure that some of those ideas can help us get out of the situation that we're facing."

Sellers was dedicated to drawing attention to our planet's changing climate and seeking technical solutions to limit humanity's impact. Among his many achievements, he led work that created the first realistic computer model of how the biosphere interacts with climate, and which helped lead major field campaigns to combine ground, airborne, and satellite measurements of photosynthesis.

"Here are the facts: The climate is warming. We've measured it, from the beginning of the industrial revolution to now. It correlates so well with emissions and with theory, we know within almost an absolute certainty that it's us who are causing the warming and the CO2 emissions," Sellers stressed in an interview with National Geographic two months before his death. "There's a group of climate deniers who have done a first-class job of spreading disinformation and confusion. We have to deal with a negative propaganda machine that uses many of the same strategies as tobacco [companies]. But scientists should fight the clean fight and explain what uncertainty means. It doesn't mean that nothing's going to happen."

Garan believes that his friend's efforts and dedication will serve to inspire others to counter the wave of skepticism that has stymied progress on climate policy, with efforts like the approaching March for Science on April 22 pressing the issue publicly.

RELATED: March for Science Gears Up Amid Debate Over Diversity

Though his name may not be well known outside of the scientific community, Piers Sellers's work will continue to benefit us all. In any event, he had no complaints.

"I'm very grateful for the experiences I have had," he told me during a conversation last year. "I've watched hurricanes cartwheel across oceans, the Amazon snake its way to the sea through a brilliant green carpet of forest, and gigantic nighttime thunderstorms flash and flare for hundreds of miles along the Equator. From this God's-eye-view, I saw how fragile and infinitely precious the Earth is. I'm hopeful for its future."