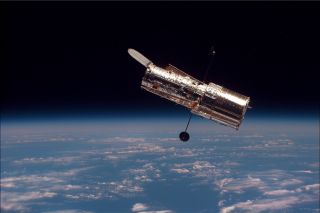 The Hubble Space Telescope has been collecting astronomical observations since 1990.
(Image: © NASA)

There's a big challenge coming to the organization that manages the Hubble Space Telescope's science operations. After more than 25 years reviewing proposals for the famous observatory, a new observatory — the James Webb Space Telescope — is about to hit the scene in 2018, which means already busy scientists are going to be even busier, with two telescopes to think about instead of one.

A committee at the Space Telescope Science Institute (STScI) in Baltimore allocates "telescope time," which is the availability of Hubble to look at various objects. As you can imagine, it's highly competitive. More than 1,000 proposals pour in every year, covering literally any location in the universe that Hubble can see. Only a fraction of them are selected.

With even more expected for Webb, STScI has an idea to manage the influx: a computerized tool called PACMan (Proposal Auto-Categorizer and Manager). While the name takes its inspiration from a 1980s arcade game in which a hungry character eats dots and dodges enemies, the role of PACMan for Hubble will instead be more of a helper for the already busy proposals team.

The current proposals process is time consuming, explained Lou Strolger. At least 150 scientists must be recruited to weed through the proposals, which cover many specialized fields.

"A lot of motivation for PACMan is to make it easier or less ambiguous," said Strolger, an STScI observatory scientist who is a member of the proposals team for Hubble, which will soon expand to include Webb.

"After we get the proposals," he added, "we ask a set of questions to the proposers: What category does this belong in based on what we defined them to be in the call of proposals — galaxies, stellar physics, and so on. We try to give key words or phrases that describe the type of proposal.”

"We [also] ask the same set of questions to our reviewers," he continued. "Which categories do you have expertise in, in a ranked order list... and give me no more than 10 categories."

It’s the categorization of the proposals and the matching of them to the appropriate experts that is particularly time-consuming. Furthermore, as a recent paper on the proposal notes, there might be biases in recruiting experts, or in other parts of the process, that demand attention. PACMan has already been tested against the human selections in previous cycles. For most of the years, Strolger said, it has done pretty well.

RELATED: Hubble Has Found the Ancient Galaxies That Gave the Universe Its First Light

PACMan's strength is finding keywords and matching them to a known dictionary that would encompass different topics in astronomy. For example, one can imagine a proposal with words such as "Jupiter" and "Saturn" in it would belong to the "solar system" categorization of astronomy.

Indeed, PACMan does very well in matching the human selections for the solar system, stellar physics, and extrasolar planets and planet formation, according to results from a recent proposal cycle. Where it has more trouble is with topics open to interpretation, such as stellar populations or the intergalactic medium, where a proposal could belong to one of several topics.

PACMan did not do as well with the latest cycle of proposals, Cycle 25, but that was because the proposals committee recategorized several topics to make them less ambiguous, Strolger said. They plan to implement the tool for Cycle 26 of Hubble and the first cycle for Webb, both of which will take place in 2018.

In the future, PACMan could save even more time by matching keywords from expert lists of published papers to keywords in proposals, Strolger said. For context, recruiting the 150 experts for Hubble takes the committee about eight months, Strolger said. If PACMan becomes adept enough, STScI could accept proposals any time instead of having to mandate a deadline for every year.