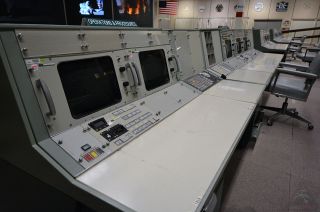 HOUSTON — The NASA Mission Control consoles that were used for the first moon landings are set to be brought back to life by a Kansas museum that restored the Apollo 13 spacecraft and conserved the recovered rocket engines that launched Apollo 11.

The Cosmosphere space museum in Hutchinson, Kansas announced its selection by NASA's Johnson Space Center (JSC) in Houston to restore the consoles to how they appeared at the height of their use during the Apollo moon missions. The Cosmosphere's SpaceWorks division will re-power the consoles so that their buttons and screens can be lit again as part of a $3.5 million restoration of the historic Mission Operations Control Room (MOCR) at NASA's Christopher C. Kraft, Jr. Mission Control Center.

"While the control consoles and monitors in the room are authentic, none of them work," said Jim Remar, president and chief operations officer of the Cosmosphere museum. "JSC turned to the Cosmosphere's fabrication, restoration and high-fidelity replica division to help them bring MOCR back to life." [NASA's 17 Apollo Moon Missions in Pictures]

The Cosmosphere has overseen some of the most notable spacecraft and space artifact restorations of the past few decades. In addition to its work on the Apollo 13 command module Odyssey, the museum also restored astronaut Gus Grissom's Liberty Bell 7 Mercury capsule after it was found and raised off the ocean floor in 1999.

More recently, the SpaceWorks division was entrusted with the conservation of the Apollo Saturn V F-1 rocket engines that were recovered off the seafloor by a private expedition led by Amazon CEO and Blue Origin founder Jeff Bezos.

Cosmosphere representatives joined NASA, Space Center Houston and Texas Historical Commission officials on April 18 for a meeting with the National Park Service, which has oversight of the restoration of the MOCR since designating it a national landmark in 1985. NASA continued to use the room to support space shuttle missions through 1992.

The restoration will return the MOCR and its related rooms to their appearance at the time of Apollo 11, the first moon landing in July 1969, though the consoles will configured to look as they did for the fourth lunar landing mission, Apollo 15, in July 1971.

"The room itself — the viewing room, the MOCR, what is shown on the screens, the visitor experience — that will all be Apollo 11," Remar explained in an interview. "That was the moment when we won the Space Race and man first reached the surface of the moon."

"For the consoles themselves, the flight controllers felt that Apollo 15 was the apex in technology for the early manned space program. They felt it was appropriate to restore the consoles to the Apollo 15 mission," Remar said. "So there will be two missions represented: the overall room will be restored to Apollo 11 and the consoles to Apollo 15."

Apollo 15 saw the first extended exploration of the moon, including the first use of a lunar roving vehicle (LRV). The consoles in Mission Control were upgraded to support the more ambitious mission, though the restored changes may not be readily apparent to those who visit the room.

"Really, to the general public, there probably won't be any discernible difference," said Remar. "But to the controllers there was, because that's when we went from flying the 'H' missions to the 'J' missions and started using the rover, so some of those experiments and new means of exploration changed the configuration of the components that were in the consoles. So while the general visitor probably will not know the difference, those who were involved will."

If the National Park Service gives a "go" as expected next month, Remar said they hope to begin work in late May or early June. The Cosmosphere's conservators will assess the consoles where they are in Houston and then remove the components that need work to be shipped to Kansas.

"We will use as much original hardware as we can, but in cases where we want to light some buttons up or have a screen show some telemetry or data, we're not going to be restarting the old CRTs, we're going to put new monitors in there," described Remar. "But we'll catalog the old, original hardware, we'll document it, we'll clean the corrosion from it, preserve it and then put it in archival quality boxes and JSC will store that on site."

As for the consoles themselves, they will be cleaned and repaired, before they are dressed with artifacts to look as if the flight controllers had just left their stations.

"While we probably will not add any coffee stains or ashes from cigarettes – our objective is to clean the consoles and remove any type of dirt, grime, debris or corrosion — each of the consoles will be dressed with ash trays and coffee mugs, papers and things like that," said Remar, noting that the dressing will be handled by NASA and the architectural firm Stern and Bucek of Houston.

The Cosmosphere plans for the restoration of the consoles to be complete by the second half of 2018.

"It will be challenging, but it won't be as challenging as the F-1 engines or Liberty Bell 7," said Remar. "But in terms of historical importance, this has to rank right up there with one of the most important projects we've had the chance to work on. The room represents such a significant period in our history and to be involved with preserving it is quite an honor."